Finally got a model of my own finished! Between being a father, taking care of the home, getting my job done and just surviving  I finally got something done! 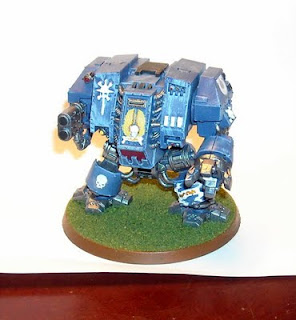 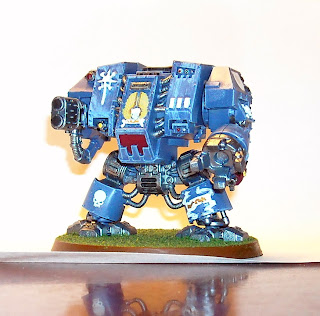 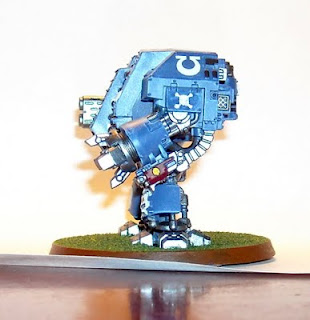 My completed Dreadnought in all his horrible photograph glory! The first unit of my NEW Ultra Marines army. I'm so pumped its not even funny!

I am pleased with how he turned out in the idea that he is, in fact, done. Maybe not a museum quality paint job but more than good enough for the battlefield. I had some trouble with the skulls, something I don't normally have trouble with, but I painted them all wrong. But, the next ones won't suffer that fate... I hope.

Either way this will go onto the Ultra Marines page as well as an update.
Posted by adeptgamer at 9:46 PM 1 comment: Links to this post

Well, I haven't been able to blog much but this one is worth taking the time out. Everyone knows Gygax, hell his name has been converted to a term to describe the kind of fantasy he had a hand in making, "Gygaxian". Today that word means death in a myriad of creative ways. It can send shivers down the spines of players.

Anyway... it's his birthday today, and although he's dead (he died on my anniversary sadly enough) it is still a good reason to celebrate.
I wasn't there for this picture, but I wish I was. I would have loved to play in a game with him as either a player or a Dungeon Master.

Happy Birthday Gary :)
Posted by adeptgamer at 10:18 PM No comments: Links to this post

If you know me you know loosing is not a bad thing in my point of view so long as sportsmanship is present and one does their best.

Today's game of USA vs. Japan was a beautiful thing to behold. Both teams played hard and did amazingly well on the field.

That is until the extra time play when Japan abandoned their sense of sportsmanship to gain a yellow card, then to blatantly throw themselves down in front of a USA player to prevent her taking a shot. Sure, the Japan player got a red card but that seriously doesn't amount to a hill of beans considering the blatant disregard for the game. I have rarely been more offended than seeing the Japanese player rewarded for such disreputable behavior by the smiles and affectionate touches from her team.

The shoot out not with standing, I feel that Japan lost the WWC there. If that had been a USA player doing that I would have been ashamed.
Posted by adeptgamer at 5:42 PM No comments: Links to this post

Is a remarkably dangerous place. Let me tell you. I got this in a trade through Bartertown (which appears to be down for about five days now) and I got it with a mind towards my family, especially my 12 year old sons. They are not the gamer their father is, which is fine, but I was really hoping to be raising a couple fellow war gamers so we could throw down some truly epic battles. We do get along with board games though and at the recent game fair they picked up Zombie Survival by Twilight Creations Inc. after playing a demo of it. Odd as it may be I found it very heartening to see them demo a game and purchase it based off its merits in the demo.

ANYWAY... I digress... The Adventurers: Temple of Chac is a very good game. We've played it twice and the first game only Matthew made it out of the temple, Chris and myself lost both of our adventurers to fire and water. The second game, last night, proved very lethal and no one made it out alive. I was closest, only two spaces from escape with 9 points of treasure when the boulder rolled over me with a five space dice casting. We have had quite a bit of fun with this game and I can see us playing it several more times before we'd be bored and I'm not sure even then. There is a lot of talk on forums that this game lacks re-play-ability and I just do not see it. I know it is the same series of encounters and how they play out but there is a definite fun in knowing how to get something done but having no guarantee of getting it done.

Also, the Zombie Survival is a solid game as well. Not the typical zombie game imho it is really a resource management game with a dexterity based combat system. You roll dice in the box lid that has a zombie pictured inside. you're trying to hit the body with a total of 6 pips or get any dice into the head shot zone. This is not as easy as it seems with even five dice. I own Zombies!!! but that needs some modification I think. We play it with rolling both the red and the blue dice; blue is number of zombies moving, red is the total spaces moved. So you can get a single really fast zombies or a bunch of slow ones, either way it is a little more pressure.

By way of a hobby update I've gotten nothing done for weeks now. I'm trying to finish up Darrell's chaos models (20 marauders and a sorcerer riding a dragon) and they are nearly done but work has been busy, life has been busy, and my wife started redoing the upstairs bathroom. So I've just not gotten to paint or model. I've got lined up some knights, some space marines and i'd like to get to both of those to keep my painted collection growing.

Also I've not really gotten to blog (obviously), photograph anything or write any more. But, I will, I've not given ground and I will continue the fight against real life to embrace my hobbies!

Wish me luck!
Posted by adeptgamer at 10:05 AM No comments: Links to this post

Okay so, I wanted to blog FROM the convention but I was bushed every night and didn't get to. Which is fine because I also forgot my camera. Now that its over a few days and my life is slowing down I can say I had a great time even though I only played two games from Tuesday night to Sunday night.

In general I felt the con was pretty decently stocked; the vendor room was sold out and there were scads of events. There were less LARP than before but I'm not a LARPer so it didn't bother me. One game I got to dig into was the Dungeons and Dragons Monster Mash by Red Shirt Games which was pretty good. I got Drizz't and his panther as one 'monster' and a mounted paladin as the other. I died but my daughter played (centaur and beholder) and she won with the centaur.

I came home with scads of loot of course but some of it stands out more than others. First of all I want to give a special blog thank you to man named William. He gifted me a wood dice tower that is awesome and I cannot wait to use it. Next up is...

...the new Conan movie is coming out in August and I am very excited. I am a Conan fan big time and it is good to see something come to a screen. I didn't like the TV series (oh it was so bad) but the xbox game kicked much ass. Michael Stackpole is connected to GAMA (I think he is a board member if I remember right) and he also wrote the novelization of the new Conan move AND AREA MANAGER VOLUNTEERS GOT A FREE COPY WHEEEEEEEEEEEEEEEEEEEEEEEEEE!!!

On top of that awesomeness he autographed it, which made my day. I have spoken to him in passing a few times and he is a fantastic person so I feel very lucky to get to encounter him and to get his signature. I'm not an autograph hound but I have gotten a few (cough Stan Lee) and I value his words because he is a nice guy, not because he wrote the new Conan novel (that just makes him awesome).

Also I was given a set of the collectors edition of Crystal Caste special edition dice. I have last years as well and I didn't like them as much (they are below) but this years gray with a hint of purple is very nice.
I also brought home a bunch of boxes...

Well I think that was all the loot I scored. I spent around 110 dollars, which is really good for so much. Volunteers are given some good rewards but we work hard, hard hard. I am looking forward to playing these when I get around to it. The first I'll probably get to experiment with is Rush N Crush b/c my boys like racing games.

That's all for now. I did add another page to my blog, a short story I wrote so if you have time to read it please do.

Be back later, until then, may your dice always roll 20...
Posted by adeptgamer at 10:37 AM 1 comment: Links to this post