In the Great Wastelands

So I've been working through all kinds of models, mostly other peoples. : /

Just how it goes sometimes huh? But in doing other people's I finished these... 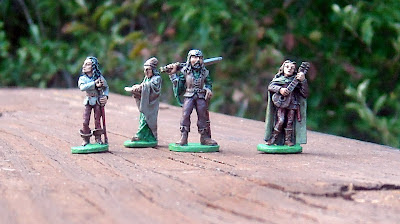 ...I have no idea who the manufacturer is and they seem slightly out of scale... well their heads seem bigger than they need be except for the man reading the scroll second from the left.

Just by accident I painted an adventuring party; thief, magic-user, fighter, and bard. No cleric which is obviously a terrible choice but they will have to make do.

Also last night we had our club night and a special project. One of our members who is not very paint work oriented brought a 1,500 point space marine army and we all sat down together and painted it for him. He painted as well, but it tortured him lol!

It was pretty cool seeing an army of about 40 models (including 4 tanks and a dreadnought) go from primed to finished in about five hours.
Posted by adeptgamer at 5:20 PM 2 comments:

A dreaded knight and a terrifying tank...

Been about a week since my last post and I'm happy to have a couple more completed models to put up. I've taken on a couple commissions so I'm only getting about 25% of my own work down right now. That should loosen up now that one of the commissions is done.

First up I finished the September challenge for the tale of two gamers that Grady and I are doing. We haven't gotten to play any, which sucks, but at least we are getting the models finished. He is almost done with his and that will bring us both up to date. This month was supposed to be an elite unit, but we were both tired of painting infantry and changed it to a heavy support. I did a nemesis dreadknight and he did...something. I'm not sure what it is. You know Orks, they make the darnedest things... 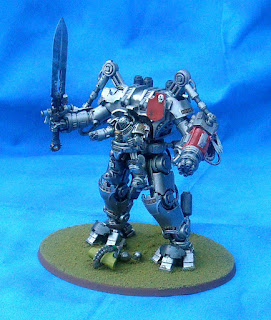 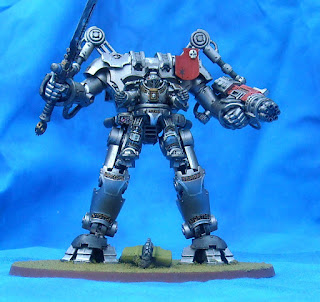 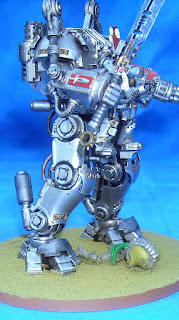 Over all I'm happy with how he turned out. There were a few things I could have tweaked to make it closer to what I call museum display level, but as I was really going for table top level I gave it a little more than it needed. I did not name the pilot though, I need to do that, his name plaque is blank. The dreadknight kit is a nice kit, but wow is that base large. Sure it "only" fits on it but there is a lot of open space there. I put a busted necron immortal that he had just downed but I need to add a couple other things. 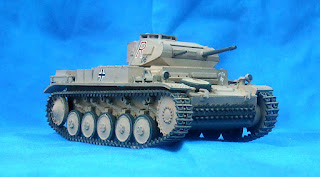 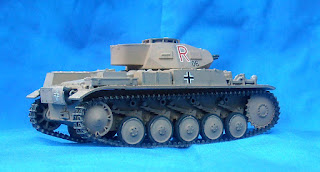 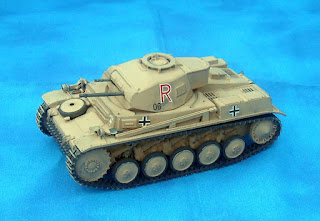 Again a good kit. I didn't get it down as well as I would have liked, I don't know how many times I painted those daggone road wheels but still had bleed over. At some point you just have to call good enough done and move on. If you're astute you'll notice I made a significant construction error I didn't notice until the model was finished, if you can tell put it in the comments :)

Well my friend Adrian provided me with more figures to paint a while ago, and I've finally started on them. Been very busy but here's the first batch...

...they are various manufacturers and I'm not sure which. The figure of the dwarf warrior on the right is an old old figure. It had almost no detail in comparison to the work sculptors produces today but it was his favorite of the many he gave me and I have to admit I am fond of it as well.

I am not sure what scale they are supposed to be, but those elves are most definitely larger than the barbarian, that is not a disparity of distance.

I really like painting a random assortment of fantasy RPG figures like this. I usually 'theme' the same batch with similar colors but it is fun to paint something different than war games figures on occasion. I've got another batch of 4 primed up already and they should start rolling pretty regularly.

Also, I'm trying to plan a project: PAINT AN ARMY IN A WEEK. Ambitious I know, but, it will be a small army and it will likely have a very simple pallet. The idea is to see if I can pull of something like that.
Posted by adeptgamer at 4:50 PM 2 comments:

I Bought a Mule!

Okay so, past weekend got a few figures done and one refurbished.
What I take from the fluff of the Mule is that it is the most utilitarian of the warjacks in a mercenary army and the model reflects this. Since I got this one in a good deal I figured it was most in character not to repaint it. I touched it up very little, reattached it to its base, and painted the base to fit the rest of my mercenaries. I'm looking forward to using him, figure that huge cannon will couple up well with my Mangler's aggressive nature :) 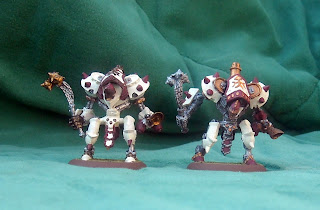 Two Repenters each painted differently, and only to battlefield quality. I'm looking for my style with Menoth, struggling with it a bit. But, I gotta say, these plastics are not very good. For as much as PP charges for these models I don't see the quality the metal models had.

Well I think i'm starting to get a feel for the Menoth color style I'm going to use and I've already started on Kreoss. I've got a handful of my friend's RPG miniatures done and I'll get those up in the next couple of days.
Posted by adeptgamer at 11:00 AM 3 comments:

Mkay so we got a lot to cover here today folks.

Firstly I finished the second month of my painting challenge with my friend Grady. This month, well August, was to be an HQ (a hq... ?) and a second troop choice to fill out our basic requirements. As I had a ton of terminators I went with a second unit of them and went and got Kaldor Draigo. I have never used a named character in an army before as I buy into that "this is you on the table top" stuff. But frankly, Draigo just kicks ass. I don't know too many dudes that can strap a storm bolter to their sword arm and bring the hurt. Of course being a level 2 psyker and having all those special rules does not hurt a bit... or the 4 wounds :) 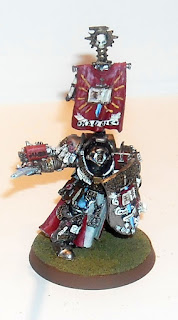 Forgive the quality of my pictures today. I am struggling to get them photographed in good light with how busy I am. Anyway, here is an equally poor picture of the terminators... 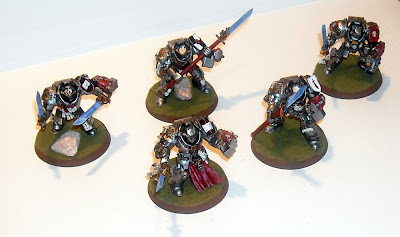 To be fair they are not my best work. Frankly I really struggled with them because the primer didn't work right and I had trouble getting the paint to adhere to the model. I use Krylon black primer, and when I primed these I accidentally used Krylon flat black spray paint. Which is nearly the same but not nearly enough and it proved to be slightly resistant to the acrylics.

This gives me over 800 points I've painted and if I add in the 5-man strike squad I got from Grady a while ago then it will be almost a thousand points. I haven't got to play them yet but I'm pretty excited too.

The 40k stuff aside I would like to take a moment to discuss something Warmachine related. Almost everyone I know either plays Khador or has played Khador. I have not oddly enough, I currently play Mercenaries and I've got a starting Protectorate force. I cut my teeth on Cryx and Cygnar was something I dabbled in a few games. I can't say I'm an expert, but I can say that the War Dog is the biggest bunch of bull I've seen in a miniatures game in a while. The Butcher's over powered rules and Vlad ridiculous spells aside. A 1 point piece that gives the caster +2 Def in melee and lets them ignore free strikes and back strikes, effectively allowing them to walk away from a fight, is way under priced. I would, without solid guarantee, pay 1 point for every caster I have ever played and ever would play for just that. Throwing in tough and counter charge is just ridiculous.

Sometimes I wonder if Privateer Press even play tests.

EDIT: I forgot the Power Maul in my title. Basically I just wanted to say I'm totally hyped that the Crozius Arcanum is a power maul. It means my chaplain is hitting at strength 6 in close combat. Sure the AP is only 4 but what ever I hit harder!
Posted by adeptgamer at 8:02 AM No comments:

Every year they cold a D-Day reenactment at Conneaut Ohio, I've been a few times and each time it gets bigger and bigger. When I first went all the volunteers were in the same field and there was a bulldozer that tracked up the beach for the couple dozen G.I.'s to hide behind while assaulting the German's.

Now there is 2 Mustangs and a bomber that flies over head making strafing runs, the bulldozer is accompanied by a couple small tracked vehicles and a Sherman tank. Over all about 500 reenactors bring their kits and stake out huge lots of real estate to pitch their tents and show off a variety of motor cycles, trucks, Wiley's jeeps, and 2/3rd sized armor.

It's gotten huge, really really huge, and if you get the chance to go see the 45 minute plus storming of the beach then definitely do so!

Some pictures for you... 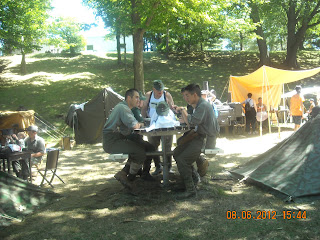 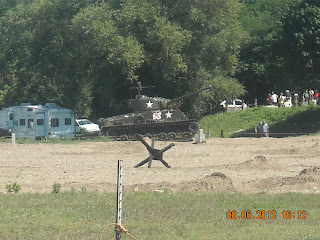 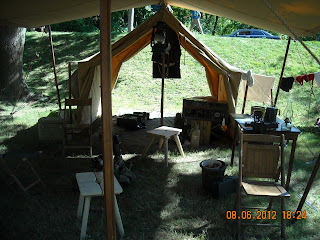 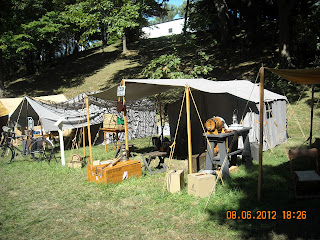 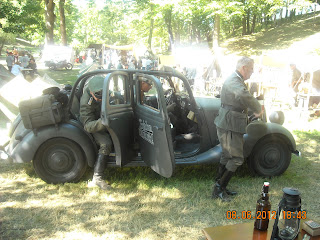 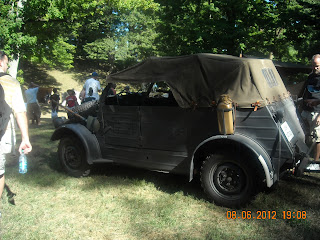 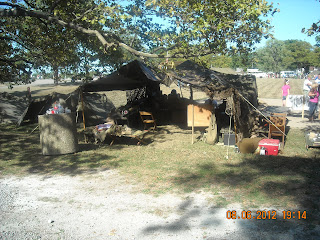 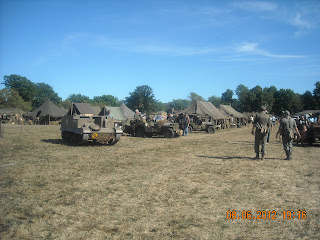 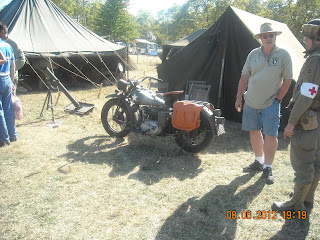 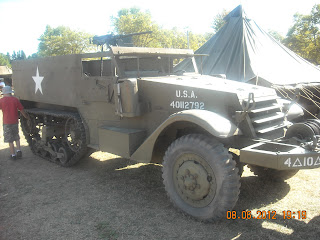 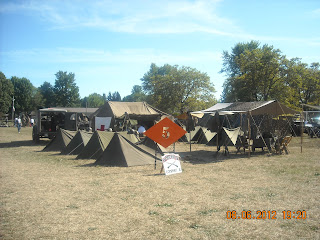 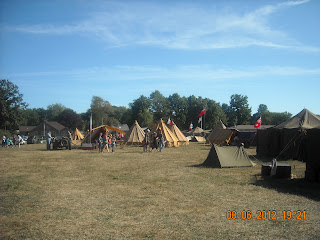 Posted by adeptgamer at 11:25 PM No comments: