Games Workshop seems to generate a lot of huzzah any more. It is easily the most critically analyzed company in the model/gaming industry and maybe I'm getting old or maybe I am becoming just another "Fan Boy" but I just don't get most of it. I'm not going to jump into all the talking points of these arguments but I do want to hit on something recent. This... 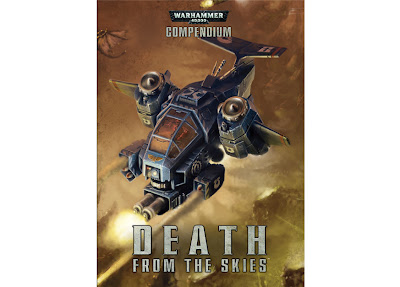 ...for some reason this has caused all kinds of stir. I think the jist is that people are upset that:


...which really confuses me. This is pretty standard from a company that has its own periodical and i'm not sure why the stores would want to carry this? It is relatively inexpensive and frankly probably isn't going to have much of a selling volume. I would like to have it mostly because I don't subscribe to White Dwarf and I totally dig the photography of models which I find inspirational just like I do my fellow blogger's postings.

And about point 1, maybe it's because I grew up playing AD&D but these magazine compendiums just seem normal to me. I can remember buying "Best of Dragon" several times and recognizing parts of later rule books having originated in Dragon and Dungeon magazines. I thought it was responsible for a company to make a compendium of their best articles and rules bits to buy easily.

Maybe I'm just insane, but I'm not the only one. It is already sold out.
Posted by adeptgamer at 12:11 PM 3 comments: Links to this post

So there is a company called Tehnolog that makes all kinds of cool toys. I got to know them from the game Robogear which looked awesomely cool but not something I got my hands on. They have apparently been busy producing more impressive lines. These are not "serious" war gaming models but I happen to like them quite a lot, I just wish they were easier to get! Well I was able to score one of their small fantasy battles box sets and this is what it looks like.

The kit is pretty sweet I think. The figures are quite large but a nice size since it is aimed at 7 years an older. I am planning on making unit fillers out of them for my Vampire Counts army. They are pretty large, and i'll probably cut the cheesy weapons out of their hands.
Posted by adeptgamer at 9:48 PM No comments: Links to this post

Inquisitor Agamemnon, a Renegade, and some walls.

So the Grey Knights are very done so to speak. There is almost 2,000 points just in silvery guys in power and terminator armor but Draigo was their general until now. I have always bought into the idea of the general of your army is your avatar and Draigo just isn't me (he's Draigo obviously). I got an inquisitor in trade and I decided that would be a great avatar. So my Grey Knights are under the command of an inquisitor, which is only appropriate!
He is from the Ordo Maleus and will be a level 1 psyker although I wish he could be a more powerful psyker. I have some Cadians and various odd figures to make a henchman unit out of but until I get a Chimera transport for them to tool around in I think i'll just have him accompany the strike squad in their razorback displacing another soldier. He will be the only non-enhanced figure on the table without power or terminator armor.

40K aside I've added another warjack to my Mercenaries collection. A friend gave me a renegade knowing I play Magnus so this will give him two to tool around with. They aren't the horrifying beasts they once were but two should make an impression! The other is gray so I decided to go with the classic green for this one and I am surprised how well it turned out. 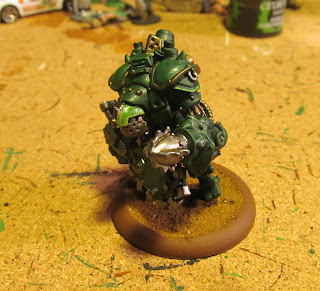 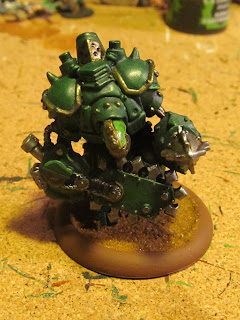 And lastly something that isn't going to shoot at you or hit you. The Battle for Skull Pass was a great box and I regret having ever parted with its contents. I did however keep the odds and ends in the box including these three dwarf themed obstacles. 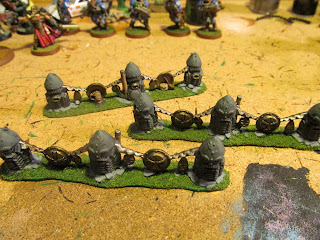 They are each around 4" which makes them a great obstacle for the random terrain generation table. I have always had a nice set of stone walls and hedge rows but these are so nice and "Warhammery" that I think they'll get a lot of use. A quick paint job and flocking on the base has given me a nice addition to my collection. I'm going to try to paint small terrain projects one at a time until I get a nice build up of new terrain.

Of course, this doesn't count the IMPERIAL SECTOR that I've got put together. As soon as it warms up, it's on like Donkey Kong and that will be one of my one day challenges.
Posted by adeptgamer at 10:09 AM 1 comment: Links to this post

If you have read much of this blog you know I work on several projects at the same time, little bit done on this one over here... little bit done on that one... etc. Well I've finished about five but here are just a couple and i'll drop the others in a few days. Better to make two blog posts than drowned you in a big one right?

First up I will showcase my favorites; a squad of Ultramarines scouts... 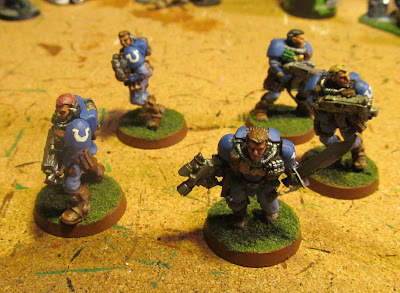 ...I really painted these guys to add to the squad that is already painted. I will probably almost always split them into two combat squads but it will be nice to be able to make a ten man squad if needed. The guy in the front with the sword-knife is my sergeant now so if I do do a combat squad split i'll probably but the missile launcher in with the the guys with boltguns. There have been a few times I had wished the missile launcher could fire at a different target from the snipers.

Also joining the crusade is a Dark Angels tactical squad... 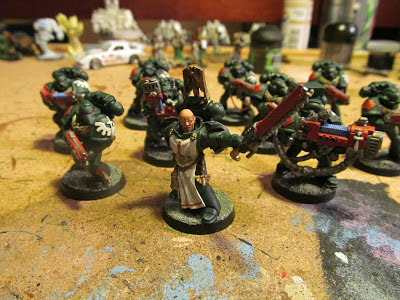 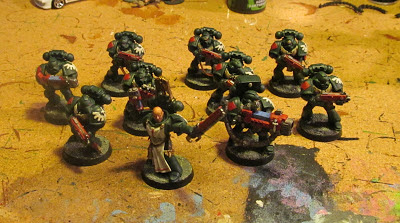 ...while I don't have the Dark Angels codex I do have the regular space marine codex and I don't think any of my friends will bar me from using them in a regular space marine army. I've always liked the idea of a crusader space marine army consisting of several chapters lending units to the battle under a single commander (likely an Ultramarine commander of course!). So this is the beginning of that. The Dark Vengeance box is full of great units and I just couldn't let them sit there without some attention. :)
Posted by adeptgamer at 10:51 PM No comments: Links to this post