Okay, so, a while ago I painted some Ultramarines for a man and in return he gave me some very generous gifts, this is one of them. Officially billed as Chapel by GW mine instead will fill the roll of "Shrine to Signmar". This is a fantastic kit for anyone who's never seen one on the sprue; all kinds of options and ways to change it's over all look. the statues on the sides are not molded on giving the potential to make it less gaudy than mine is and there is even more bits if I wanted to make it even more gaudy! I opted to leave off the chimney and go for a hole in the roof to age it a bit.

This is the first of three kits I have that are specifically warhammer fantasy battle kits. I've also got a Garden of Morr and Fortified Manor House. The house is still in the box, it is intimidating since it is actually three kits (Chapel, Watchtower, and the now gone walls and fences kit) with a special little kit to connect the two structures if you want. I'm not sure if I should make it a manor house or two buildings. Any thoughts from the community?
Posted by adeptgamer at 9:43 AM No comments: Links to this post

So finally here are some models to peer at. I can't really say what influences my decisions on what to paint but sometimes it just seems easier to paint some things over others. After playing a game of whfb with my friend pitting my vampire counts against his empire it was so good we decided to make it into a rough campaign. In that game I fielded Mr. Bones from the Reaper Kickstarter as a master necromancer to lead my army. The miniature was just filled with charisma and in no time at all I decided to get him painted up and some other undead to go with him. 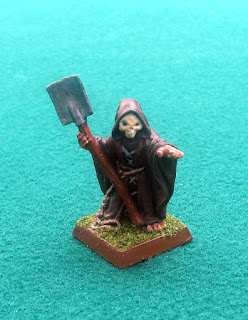 In my mind this dude is a completely inept necromancer who is trying to raise a great army of the dead to overwhelm a province of the empire and carve out his own kingdom. He's not dead like most necromancers and carries as shovel because he has no greater magic implement to assist him. His skull mask isn't even a real skull, it's paper mache. Never the less he is a master necromancer and through raw will and persistence he is a valid threat.

Among his recent successes are these... 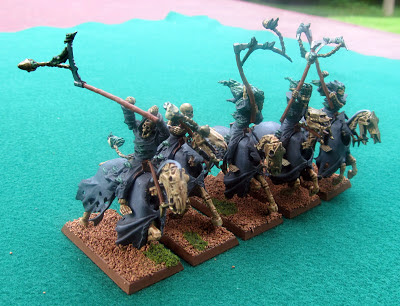 ...hex wraiths were a hard choice for me. I had a box and it could be these or black knights and both are pretty sweet I think. Ultimately the in-corporeality of the wraiths fit my other wraiths and my ghosts, plus I have some old Bretonnian knights I want to try to convert over.

Also Mr. Bones got lucky with this guy... 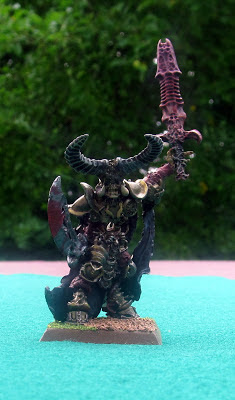 ...the Great Crane from Confrontation fame this is one awesome piece. He is very large on a 40mm square base and to use him as a wight king will require permission from my opponent i'm sure. He is just such a hoss looking piece though I can't imagine not using him!
Posted by adeptgamer at 8:30 PM No comments: Links to this post

Back with Lots to Say...

Okay, so, Origins is over again for another year which is both a shame and good as I always work my butt off at this thing. I got to play a lot more games this time though which I have to attribute to my sons. Being young teens they had more energy than me and would find events to play in and drag me to them which was nice. I can honestly say this was the best convention I have been to in a few years. No games jumped out at me although there was all kinds of excellent exhibitors and even Games Workshop put up a booth this time.

I understand that the core book for 40k is 75 dollars, and the Eldar codex is 50 and then the Iyanden book is 50 for a grand total of 175 dollars before miniatures...but this is normal of a hobby from what I can see.If you play Pathfinder you're going to spend 145 dollars on a core book, a game masters book, a bestiary, and a game master's screen before miniatures. Sure that is 30 bucks different and there is a lot more raw pages in the PF books but i'm pretty sure this is just product for product here.

All of that aside, I am really excited to have a new game in my library. XBLA just released Chronicles of Mystara which is a combination of Tower of Doom and Shadows Over Mystara which were two most excellent arcade games I never really got to play enough. Now that I have them on my Xbox Dark Souls has some competition for my limited video game time! 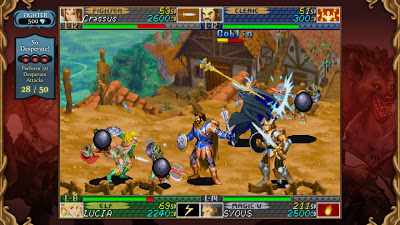 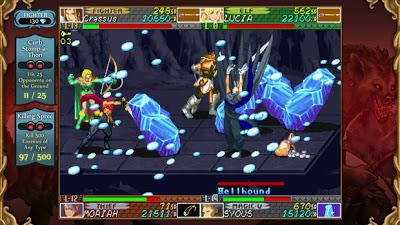 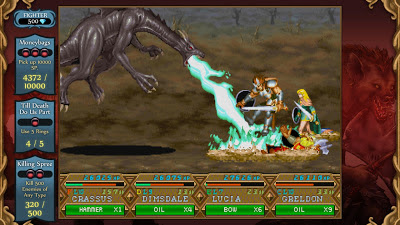 Posted by adeptgamer at 10:12 AM No comments: Links to this post

Not that way! Okay, maybe a little bit.

Either way on Tuesday me and the guyzos are off to Origins game fair to help out as volunteers and hopefully get some great games in. I will be taking the camera but will not try to blog from there. I'm taking no electronics beyond a Kindle: Fire and cell phone so don't expect to hear from me. If you happen to be attending Origins just ask for me at the security kiosk in the exhibit hall :)

As an aside my Cleric has finally found his way out of the Tomb of Giants. It took a few tries running like a coward but I got out. After that things have opened up for me a bit. I went on to defeat Sif which was both a little sad and a lot exciting. Now i'm trying to locate the bonfire in Sen's Fortress, which I've pretty much conquered, so I can take multiple tries at the Golem there without running a blue mile to get to him. That will have to wait until after the Origins trip though :)
Posted by adeptgamer at 9:05 PM No comments: Links to this post

So I have finished watching the first (and to date only) season of Tron: Uprising on Netflix and I enjoyed it quite a lot. Tron was a movie that had a dynamic impact on my childhood, much like many thousands of others, and the Tron: Legacy movie was something I really enjoyed. 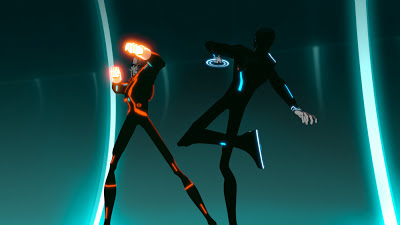 Well my sons have been exploring their possible interests in role playing games and I was given some 4th edition core books just because he doesn't like 4th. As I sat watching Tron: Uprising's last episode and flipping through these books to reacquaint myself with the rules I had some inspiration.

It seems to me that it would be just GREAT to run a game of Dungeons and Dragons 4th edition as if it WAS in fact a computer simulation. That the characters (avatars) were aware of the game world being just that, a game world, and embracing the mechanics instead of trying to paint over them with too much fluff. Instead let the story be just that and let the players as their characters speak freely of levels, and stats, and scores. Give out the difficulty scores, let them know hit points and armor class. Just open it up completely much like the Tron world is.
I can't help but feel this might give many players what they are looking for. The stories that the players play through can be just as involved and just as much fun. It just takes a different form in presentation that can allows players to blend with the mechanics of the game more.

Now this beings said, don't take me wrong. I am an old school role player and when I learned the game you didn't get to know anything. It was a simulated reality so you were up against what ever you perceived as a player. There were no skills further than what you brought to the table and your ability to roll a twenty-sided die. I appreciate a good game where the players embrace ROLE over ROLL but 4th edition doesn't seem to suit that as well. There is a lot of mechanics involved and rather than building a weak pretense for the shifting and square blast ranges. Plus I can't help but feel that would open up some very sweet role playing opportunities (ironic I know) that fit the context built. Notice how in all 4e artwork the dwarfs all have dwarf equipment even though you just KNOW they found that hammer somewhere, well, with this context that is simple. A character claims an item then it's code changes to suit the character's race. That's the simple take, the higher end take is this. Items that code DOESN'T change are artifact in quality giving an indicator to the player and the item can change over time to indicate the character's mastery over it.

Truly this is just spit balling but it feels like a good fit for this rules set, what are your thoughts Mr. Internet?

Posted by adeptgamer at 12:55 PM No comments: Links to this post