I haven't gotten any hobby work done as of late. I am in the middle of the Romon Auxiliary Cavalry, a Venomthrope, and a Dwarf Dragon Slayer. In the midst of all this awesomeness though my son decided to get appendicitis and spend three days in the hospital. He is okay now and is home safe and sound but it was quite a harrowing experience for us all.

Also, Starlog magazine is not availabe on "the internet" through the Internet Archive. I love nostalgia and this is so much nostalgia it is like a stack of yummy pancakes!
Posted by adeptgamer at 9:27 AM No comments: Links to this post

As promised here are some pictures of my first finished Ogre unit. 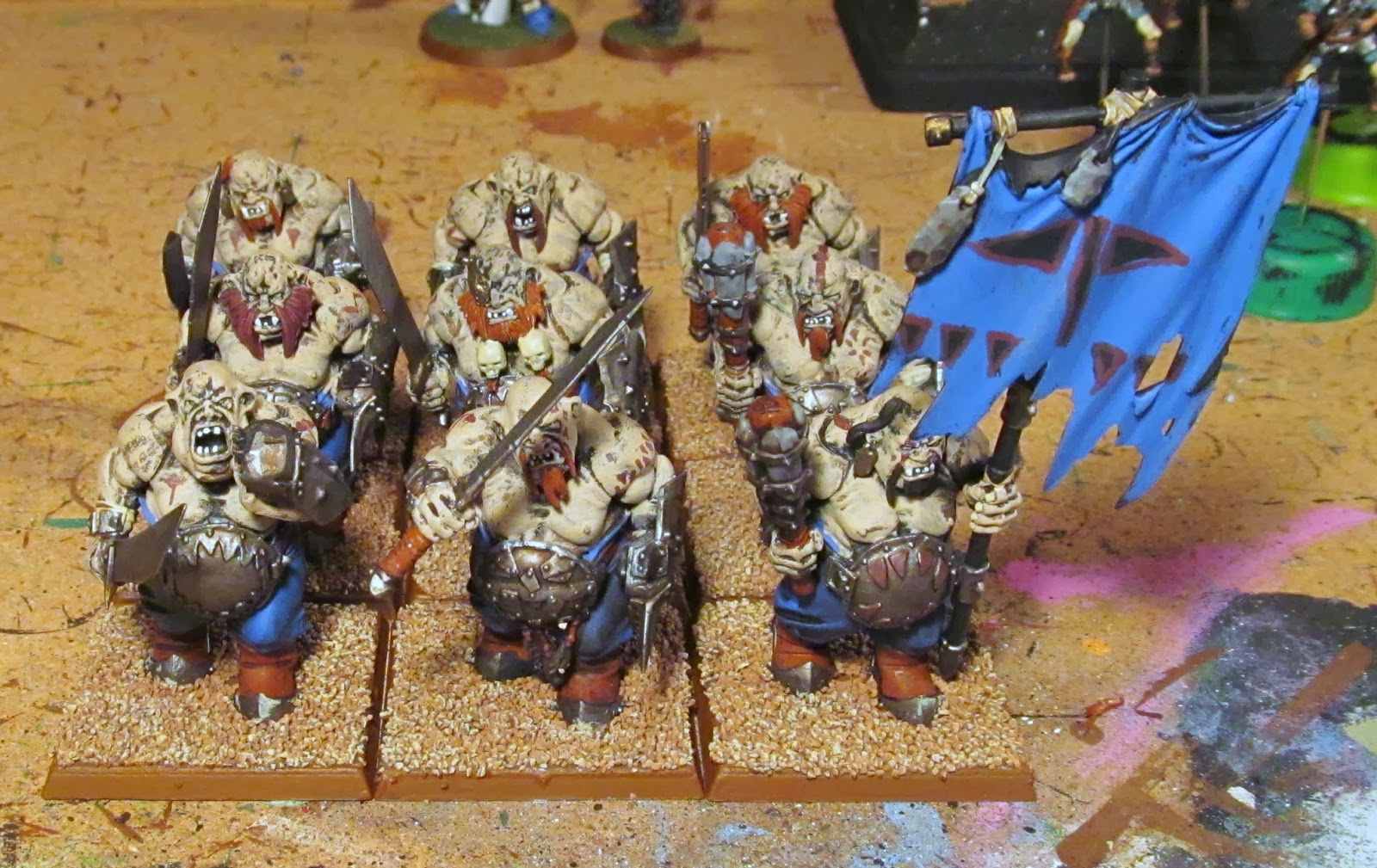 The unit consists of 9 ogre bulls with hand weapons, light armor (I guess that is what you call a gut plate and some boots huh?), and iron fists. It includes a full command, which is always funny for me with a unit with only 9 models. But that unit has 27 wounds to it which should make it pretty survivable. 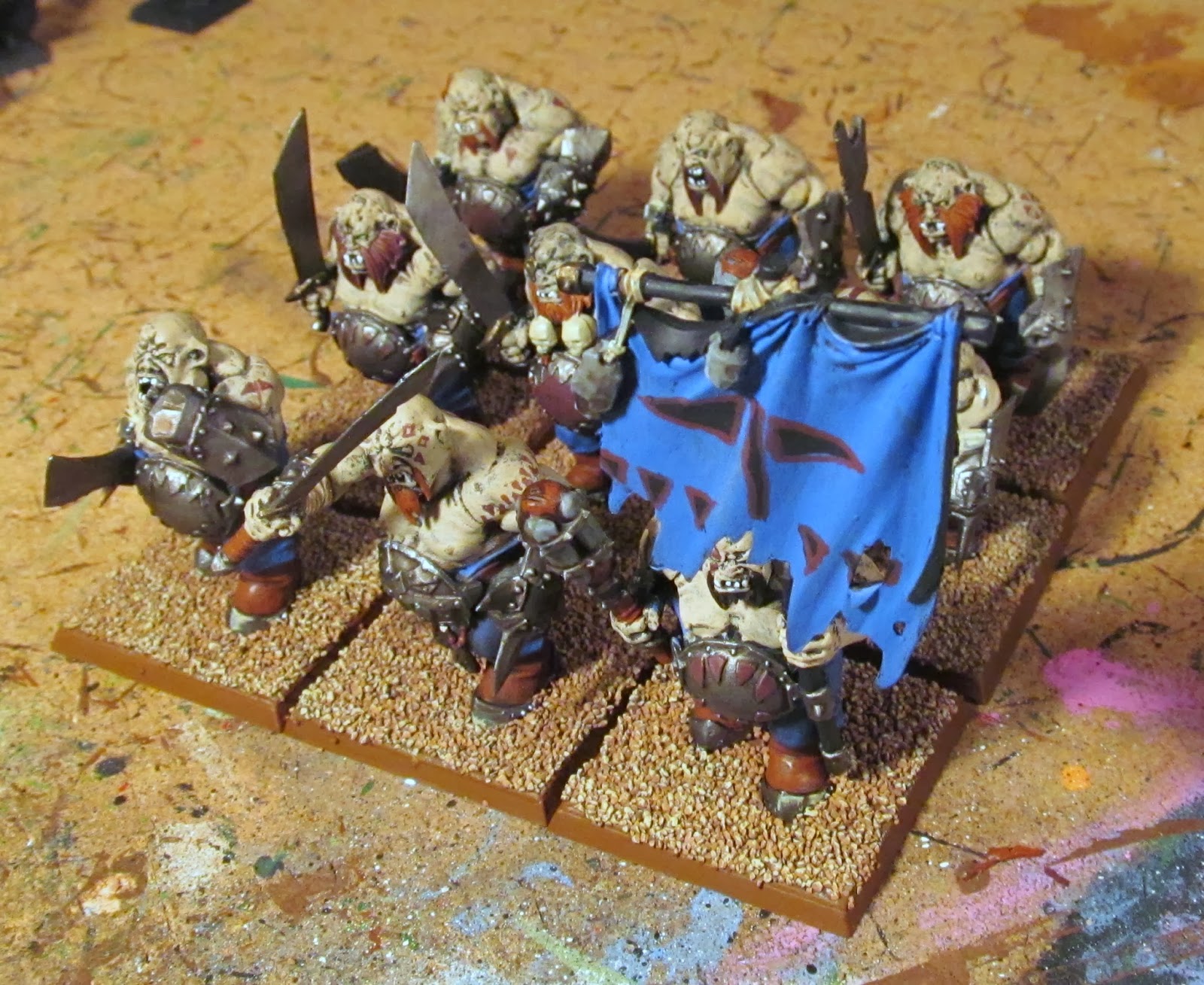 On the charge the three bulls at the front should get strength 6 impact hits, then the unit will generate 19 melee attacks, then 3 stomp attacks. They have a armor save of 5+ (not much there) and the sword and board parry save as well. I think you could confidently call this a "standard infantry unit" but it prices in at over 300 points.

The tribe I've decided to create my own tribe; the "Tooth Hammer" tribe. My rough background is that they are from the mountains and often interact and work for dwarfs so they have adopted a hammer as a symbol. the banner in the first two pictures depict the "tooth hammer" symbol. I plan for each unit to have its own color to kind of unify the unit but the army itself will only be unified by the red paint/tattoos and the "tooth hammer" symbol. I think this plays into the mercenary background that the ogre kingdoms are supposed to have. In my mind my tyrant pulls together they small bands to serve him but a lot of the time they are off hiring out to fight for others. 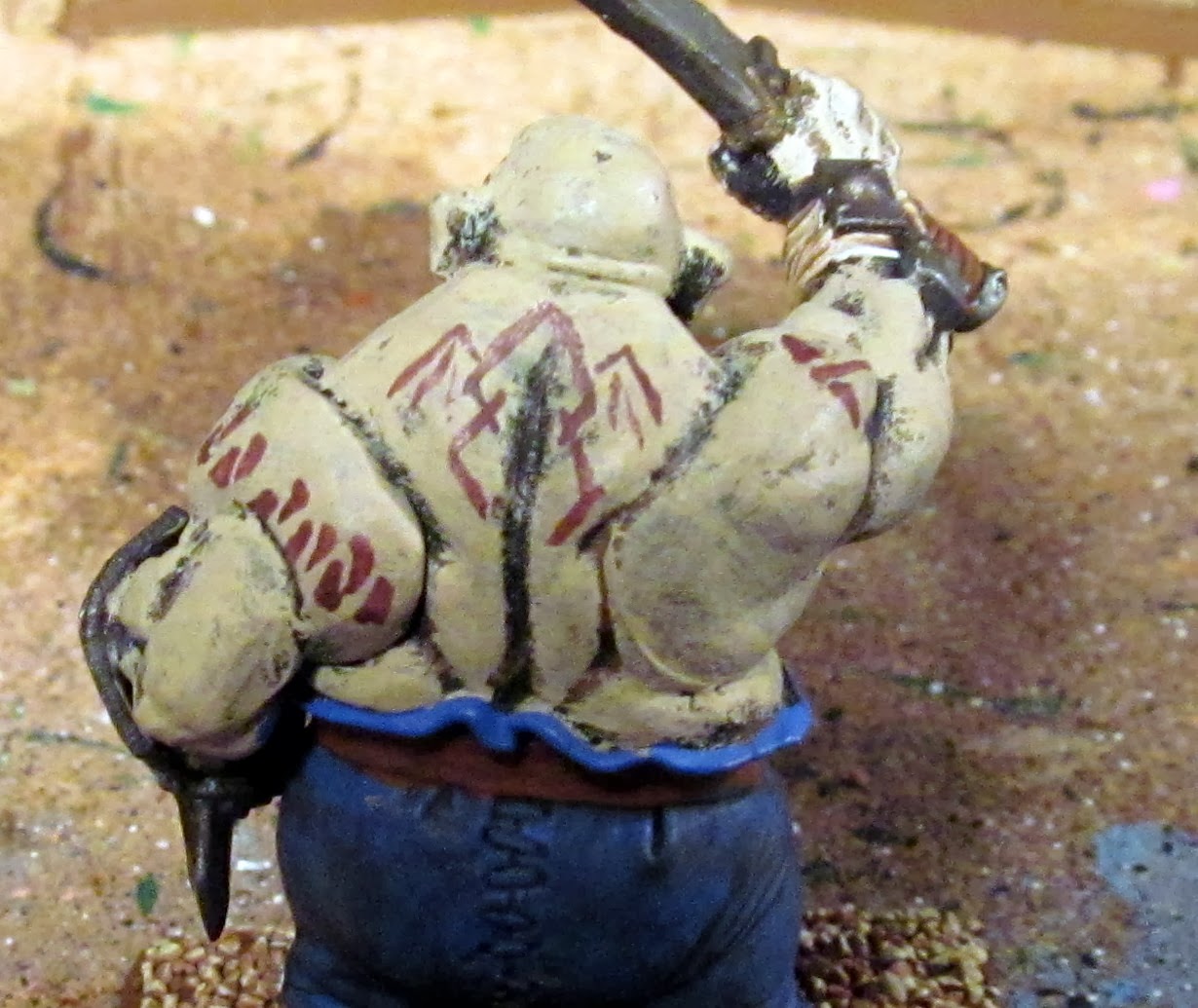 A little extra I wanted to add was back paintings. Each of them has a mountain painted on their back to reflect their home. I'm not all that good at free hand but I think it gets the point across :)

Over all the unit was pretty easy to  paint and that means that in general the entire collection should come together pretty quickly. I have a rough plan so next up is some iron guts but they won't go on the table till a few special figures I have on get done :)
Posted by adeptgamer at 11:40 PM No comments: Links to this post

I don't normally promote Kickstarter on here because in general I don't buy into Kickstarters. I did the first Reaper Bones but frankly if you didn't buy into that one you were either a little crazy or wanting to having something to regret in your life.

That said I feel a need to pass on the Kickstarter for Darkest Dungeon...

...if you like fantasy, rogue-likes, Lovecraft, rpgs, and computer games this is pretty sweet.
Posted by adeptgamer at 8:26 AM No comments: Links to this post

I Have a Wrench and I CAN Fix It!

So I am not a tournament player in general. I don't like the hard-core-win-no-matter-what factor that often plays into a tournament. I played in a couple Magic tournaments years...okay decades...ago but those days are past. I ran several and I really enjoy organizing and managing tournaments but not playing them. This in mind I think all the talk about how 40K is broken considering the results of the Las Vegas Open are basically absurd. Maybe I'm the crazy one but I have never found it in print where the armies were balanced or meant to be balanced. It seems evident to me that if you're going to go play in a tournament either do it for fun or spend the money to buy the winning army. What Magic players refer to as "net decking".

There is a fix though, let me get out my wrench.
Historical war gaming tournaments commonly use a nice little twist where in each match both players play both armies. This should effectively remove the cheese from the sandwich that is making every one bitch. It isn't a perfect fix. I'm not saying it is, but it is a fix that would bring a little more balance to scoring, reflect the players more than the rules, and in general give tournaments a chance to be a little more fun.

I can only imagine the feeling of joy one will take when swapping armies then punishing the guy who just tabled you with his own army. The army he now has to defeat if he wants to climb that ladder to victory.

Now the obvious flaws in this fix comes in three forms:


I think any of these three aren't really that much of a penalty for the potential benefit.

On the modeling side I am nearly done with my first unit of Ogres so you will see them coming up here soon and my wife has spoiled me again and surprised me with the new Dwarf Dragon Slayer figure which is just fantastic. I have moved it up in my painting que to the front so that I can give it some love. I don't have a dwarf army and I won't get one because I don't like playing dwarfs, but I do really enjoy PAINTING dwarfs strangely enough.

So, see you soon? You know you want to come back ;)
Posted by adeptgamer at 10:22 AM No comments: Links to this post

Ogres are Calling to Me...

So I forgot to take a picture of Gary's Mortis Engine...i'll get it later (riiiight).

But with the board suddenly cleared I had that moment of pause where I can plan a project(s). Immediately I brought the Roman Auxiliary Cavalry over and started them. But I also wanted to get some fantasy placed on and I have a nice Ogre Kingdoms collection that has not been addressed at all. I recently completed a trade that put the last piece I was really looking for, a butcher/slaughter master, in my collection and it seemed like an omen to start on them!

So I've put together a little plan. I like to plan small starts to armies. I LOVE the whole "battle force build" thing even though I've never gotten to participate in one. So my little army list for the ogres is...


This comes to almost 1,000 points with a magic banner on the ironguts and some magic and a big name for the bruiser general. These 20 models is about half the total collection which has a nice selection (a big monster, a couple monstrous cavalry, a solid amount of infantry) so long as you don't count gnoblars that jerk it up by 50% more models for about 50 points.

Here is the test model for the army. I plan that each regiment's pants will be a different color rather than all of them having the same. I think this will give each  unit a cohesive look but the army itself will look a little more mercenary. 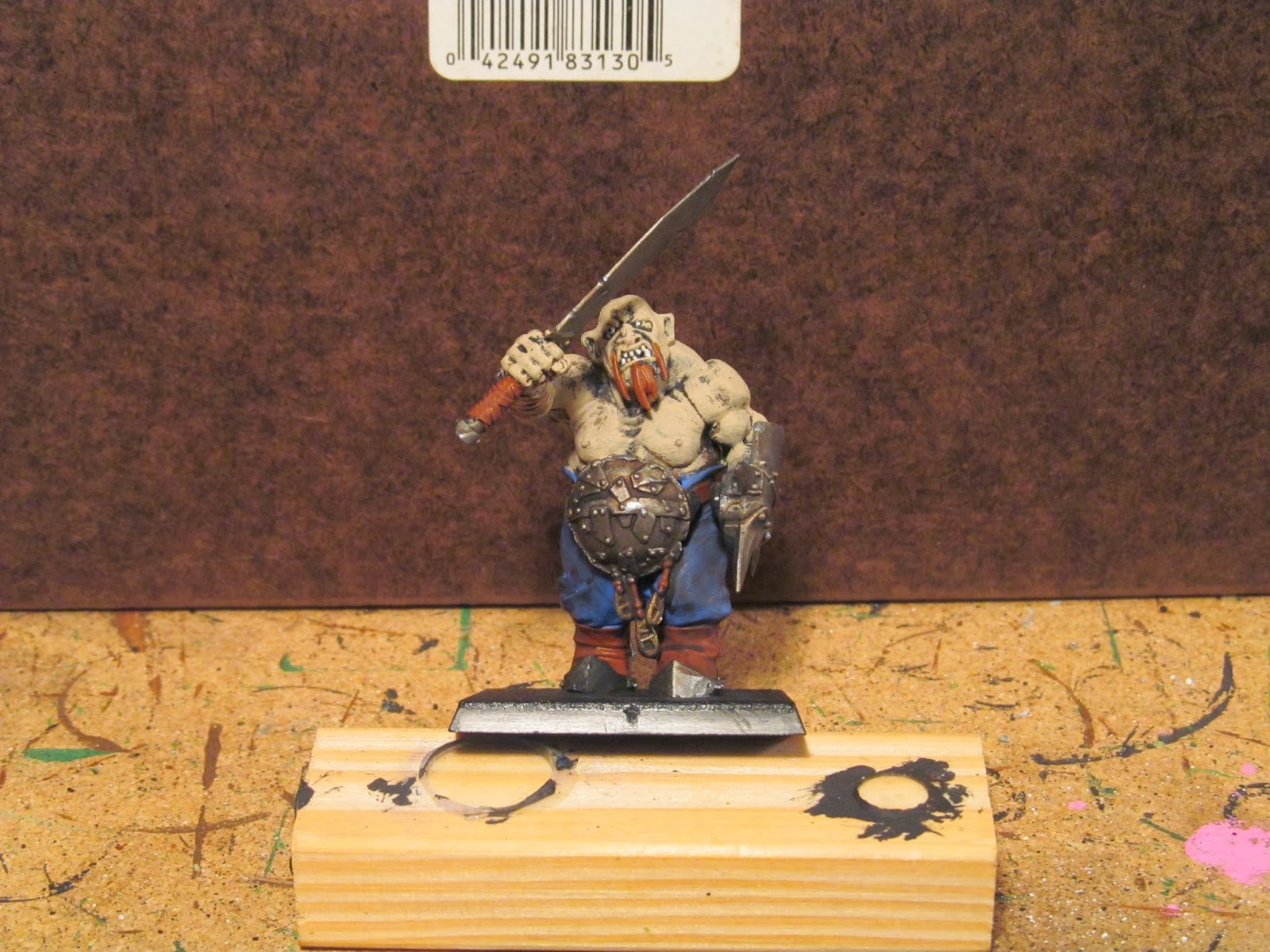 I painted this over a black prime with dry brush brown then tan for the flesh. Gun metal with brown wash over that. Same with leather and pants. I'm not sure I like the pants so dark : / Thoughts?

Also, since I'm getting to blog I think I'll throw some more stuff up! 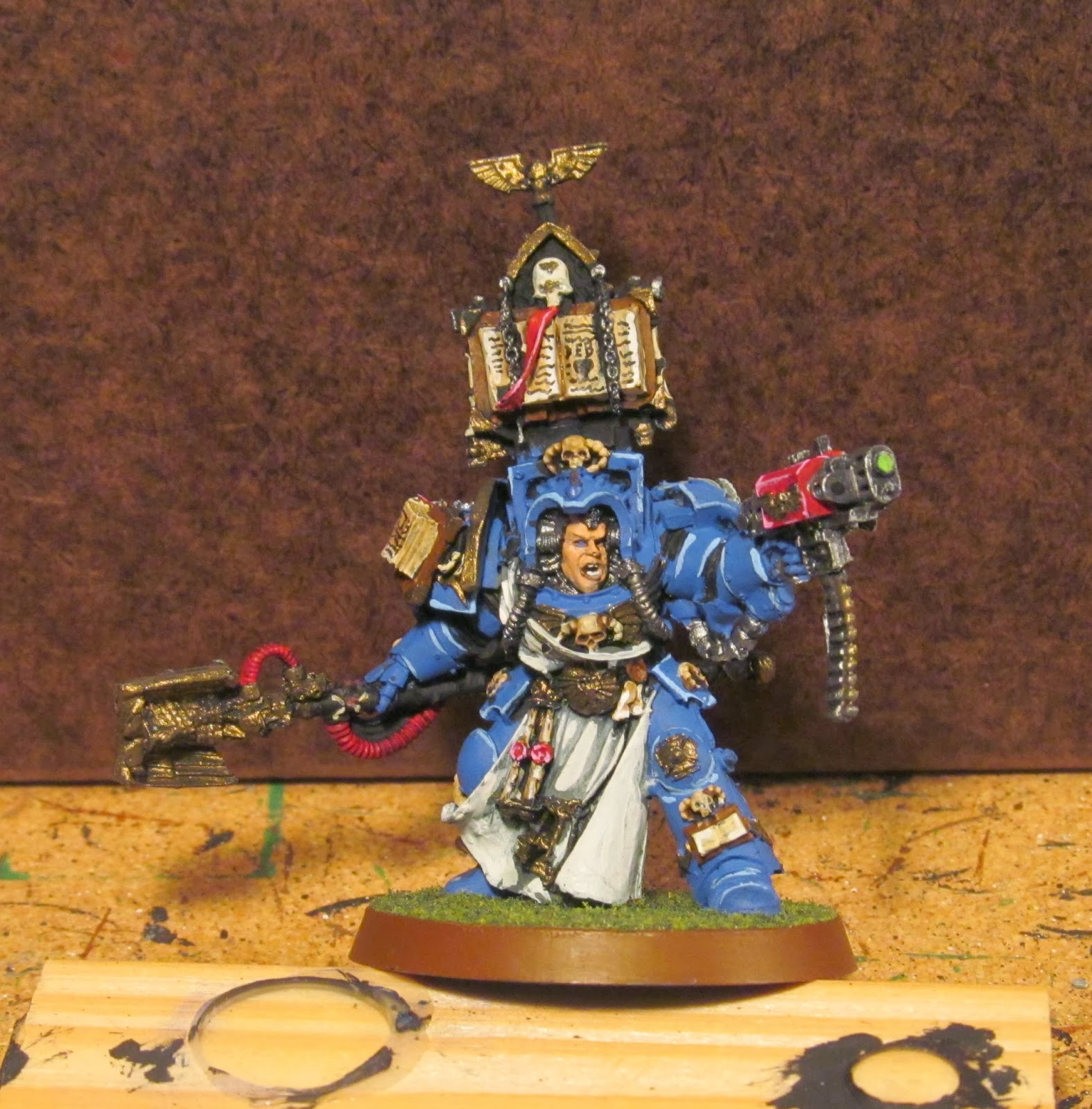 My brand new Ultramarine Librarian! My wife gave me this model for Christmas and I was super excited. Then I opened it and inside this kit is THREE left hand options and one of them being a comi-plasma! I LOVED it! Combi weapons are so sweet and in general I don't see anything useful for a librarian since they will usually have a shooty power. But combining this with the ability to deep strike with some other terminators is great. 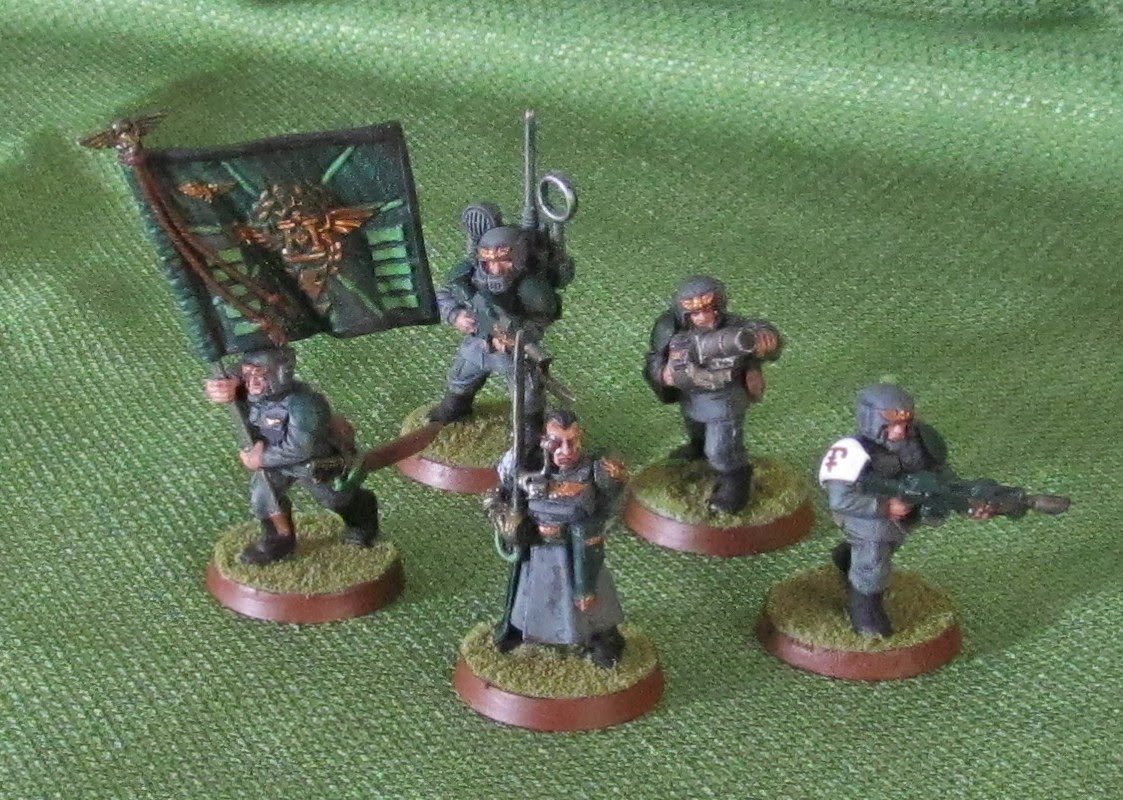 I said I did some Imperial Guard and by darn here they are. Sadly it will be unlikely there are more than these any time soon. I am trading them off (but not these models) to try to obtain some Tyranids.

I liked painting them though. It was just a kind of test run thing and they painted easy considering the scheme I used. I figure they will find plenty of use as traitors or just an odd unit or command thrown in on scenarios. 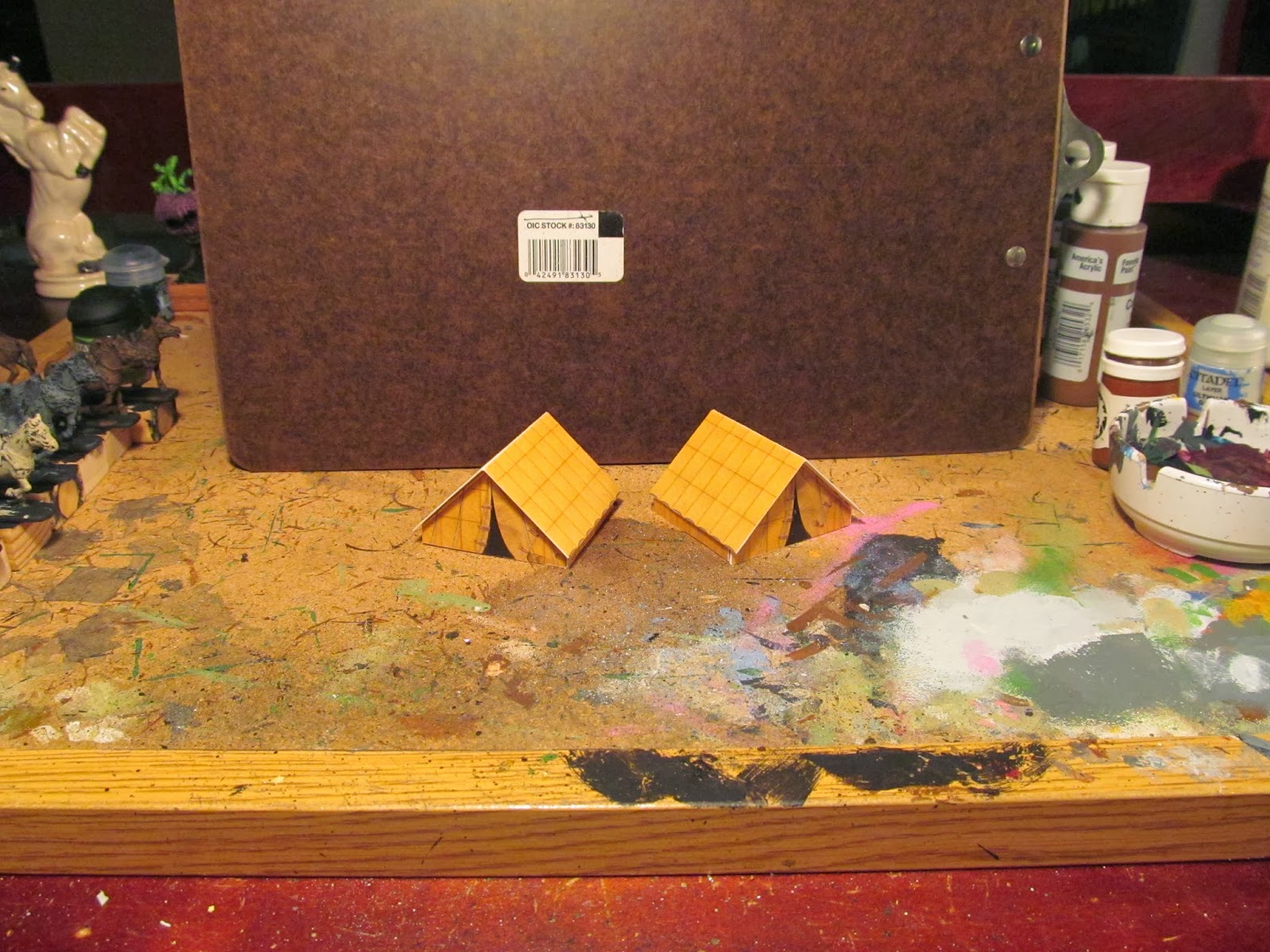 ...some tents! Gotcha didn't I? These are cheap card tents! They are off the side of this box and after finishing all the Roman's in the box I just threw them together on a whim. I am terrible with card models but I got these together alright and actually I think they could be much more useful than I first though. Beyond random war game filler they would be useful in skirmish scenarios and even in role playing. So, if you have them you should put them together too. They are much bigger than they first look.

Now I'm working in earnest on the auxiliary cavalry and some ogres that is what you can expect next. But, even then, since my honey got me that Venomthrope and my friend is priming it for me...well lets just say you never know.

Posted by adeptgamer at 9:41 PM 2 comments: Links to this post