In 1988 Citadel released their first actual army box. It had a lot of box sets before then but this is the first comprehensive army on par with those released even today. It provided a range of models and units at the same time with the option to jig one (or two if you were so inclined) as a commander of sorts. This was the Skeleton Army Box.
I recently obtained this one in trade and when it arrived the box was still mostly wrapped in the original plastic, which is saying something for a box that was about 25 years old. The price tag was still on it! The original purchaser shelled out $22.95 which was a pretty solid expense for 1988, I was 14 when this came out and that would have been pretty costly for me if I had been lucky enough to have access or awareness of Games Workshop product lines. The internet has made it so there are very few secrets or unwalked streets of the hobby world. When I was 14 my entire gaming understanding was the board games at Hills, D&D, a store called Castle Comics which had Ral Partha miniatures, and that was pretty much it. I knew there were game stores North of me but they were mysterious things in a mist filled land fraught with dangers.

This posting covers all the contents of this box, every side of it's artwork and advertisement and all the figures inside. That's why it is picture heavy, but if you are like me and these classic kits tickle your hobby bone you should enjoy it. If not, well, scroll down to the bottom? I don't know, I got nothing for you.

Let's first look at the other sides of the box...
Okay so there is the box art. It's worth noting that the cover art by "Fangorn" which makes it even cooler and I have to make the statement that I still love the artwork from the 70's and 80's. There are many fine artists today but none of them catch the same "feels" as these did. Just my humble opinion.

This box was not lax on advertising though, observe...
That is a lot of product advertisement squeezed into five panels. It's worth noting that the bottom picture is the bottom of the box and the only advertisement that the purchaser will see before it's opened. Citadel and Games Workshop was putting some heavy money on getting further buys after the customer opened the box.

I love old advertisements, they are just so much fun to look at. This is why I love having old boxes even if I can't have the figures in it. This is a special find for me as I get both ;) 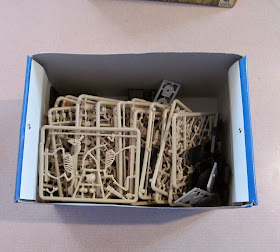 ...and immediately start drooling. Will you look at all that plastic crack goodness! My early years war gaming had me wishing for and undead army (before it was split in twain) mostly because the skeleton kits were so good. I have a significant Vampire Counts army now and some of the skeletons may be from these old sets but I don't believe so, i'm pretty sure they are from the plastic production right before these.

Shall we dump it out? 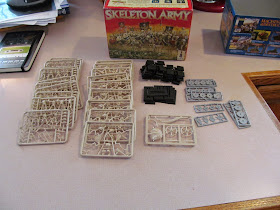 Okay well that fell out neatly! I guess that is just how well Citadel packed their kits in the good old days huh? ;)

Wait a minute, this isn't what the box contents said at all! Where are my skeleton riders? Why do I have extra infantry bases?! What is up with the holes in the shields?!? Lets take a close look at the sprues...
So anyone reading this obviously understands I'm being a little facetious. It is evident that a couple of the horses are for the chariot and even more evident that you had to put some of the infantry on the chariot and on the horses. It isn't to the same quality that Citadel produces now but in 1988 this was some quality work, and I would argue still maybe superior to some manufacturers (including Citadel itself to a certain extent). There are sufficient options to create some real variety. We are looking at at least seven infantry options (sword, falchion, axe, spear, scythe, pike, and bow) and just as many for the cavalry (pikes become lances) and the charioteers can really tool themselves out which is very nice for them.

The shields give you the ability to pick out a few with some interesting shapes (ninja star ftw) and the infantry sprues have nice little bosses you can glue in first so that you don't have a hole in the middle of your shield which is a nice touch I think. I will admit more coffin shaped shields would have made sense. I can't be sure this was standard drop or if this box just happened to randomly have six sprues of the most boring shields.

All this aside, I think a real gem of this box is the variability. You have the chance to build up to 40 infantry if that is really what you want. Of you could even build some double rider cavalry, 10 instead of 8. These are small variations I know but it is nice in a box set like this for the 80's.

The armor bits are also quite nice. With 10 sets of them you can turn the cavalry into heavy cavalry, tool up your chariot, or even create a unit of 10 heavy skeleton warriors. If you really wanted to go for maximum troop option you could do this...
This is a great box set full of options. I can't even begin to understand why this isn't being reproduced in some manner by some miniatures manufacturer. I mean I know they can't out and out copy the mold but they can surely produce one of equal capabilities.

Last but not least the box tells us there are banners on the inside flaps and with some careful unfolding you find them printed on the lid. 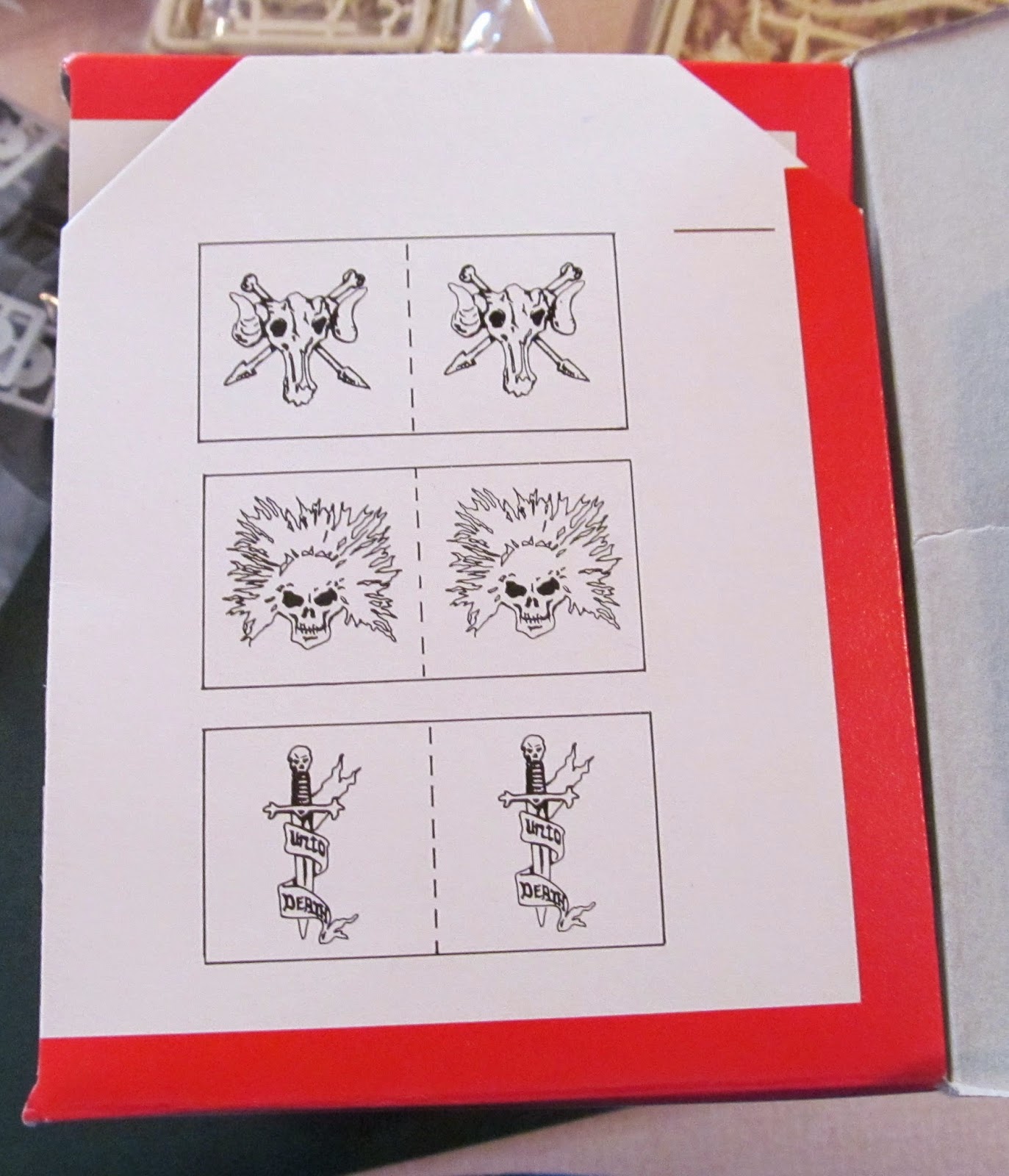 I think these are just a wonderful addition. I find it wildly frustrating that this isn't still practiced by Games Workshop to this day. Their boxes are fantastic and to print some extra banners and icons in plain black and white would be almost no problem. You know they have tons of extra artwork lying around, and even if they don't I'd wager it would be a small task for some of their excellent artist to squeeze out a few pieces for this kind of thing.

Well there you have it a full detail of the 1988 Skeleton Army Box release from Citadel. This has been a treasure box for me for a long time and to get one has realized a long term personal goal. I really enjoy sharing this with all of you and thank you for spending some time with me :)
adeptgamer at 3:33 PM