Yesterday was my game club night and I got to do something I rarely get to do, I got to put on the table all of my painted Ultramarines in a face to face duel with all my painted Necrons. It was a sight to behold... 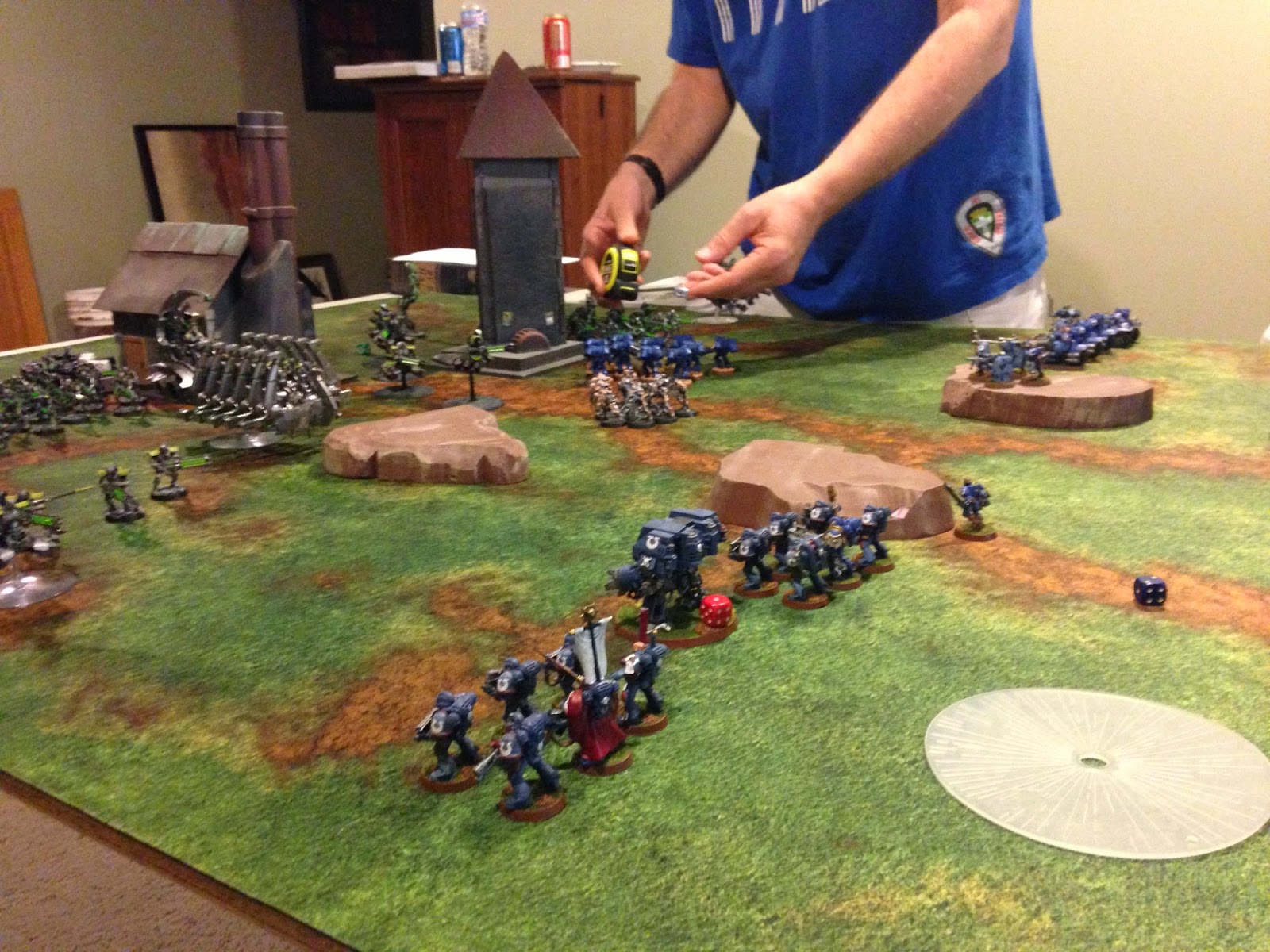 ...this shows only part of the game off screen right is a contingent of armor and a Stormtalon bringing some firepower. Also, two units of terminators with accompany characters (librarian and chaplain) haven't entered into the fight yet.
Posted by adeptgamer at 7:12 PM No comments: Links to this post

I used to play a lot of Warmachine, I loved the game. I was the first in my city to buy it and I got many friends to play it. Now I just find it a repeated practice in frustration and agony. Last night I played a game of Hordes with my Trollbloods against my friend's new Skorne army. It was 35 points and this was the build:

Ever since MkII I feel as if this miniatures war game has become something else. I find that my units don't perform well and are outclassed by units of similar cost with much greater abilities.

I also find I am in a sharp strange minority here. Feels like this...
It may be I just don't jive with this game because every time I've played it since MkII, when I can actually finish a game, I feel "unpleased". I know that isn't a real word and I just made it up but it applies. I never feel like I got anything out of a battle. I just feel mauled completely. I don't even get to do any mauling really.

The past game is a prime example of this. We played it to conclusion even though I killed only a single model on his side, a single pain giver who got caught in Rorsch's thrown stick of dynamite. I tried some stuff;


My friend won the game by acquiring 8 control points by the end of turn four and I had 3 control points. I had an Impaler left, Madrak, the KSB unit and my Fellcaller hero.

My frustration stems from the following; the Dire Troll Mauler is a great piece and is 9 points. The Bronze Back Titan has everything he does, plus counter charge, and an extra attack, and a couple other powers for 11. 2 points really isn't enough for me to compensate for that.

Don't even get me started on Molok, or Makeda's spell that just let everything add a dice of damage.

I know I could play what I have better. I'm not dumb. But the game does not encourage me to want to play better. I feel that so long as you keep buying the new models, you'll win, and if you play your old models. You'll lose.

Posted by adeptgamer at 2:19 PM 2 comments: Links to this post

Sorry I didn't get much blogging to you. I tried, but I had trouble facilitating it through my phone and my sons wouldn't get off the computer for nothing, also I was tired a lot. According to my pedometer I walked 85 miles in the days of the convention over the 60 hours I recorded. So not like I was hauling or anything but it was no stroll either.

Anyway, on with the picture show... 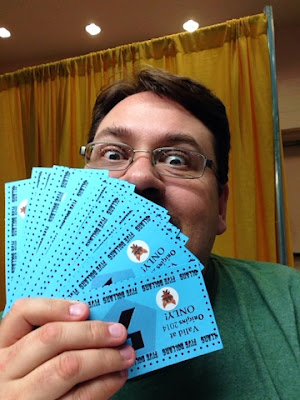 GAMA is a great organization to volunteer with for many reasons, one is the sweet play money they give volunteers that can be used like cash in the convention and with some local businesses. Here I am flipping my swag around! 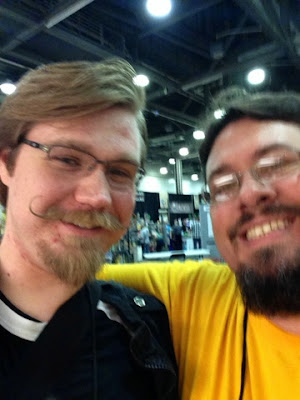 This is my friend Erik, I grabbed him to send a picture to my wife to which she replied "So you get to hang with vikings, nice!" 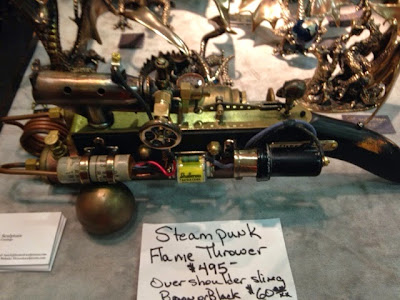 Some of the exhibitor retailers bring some really nice hand crafted items, many are pretty pricey also but if steam punk cosplay was your thing i'm sure this would be a prize to own. 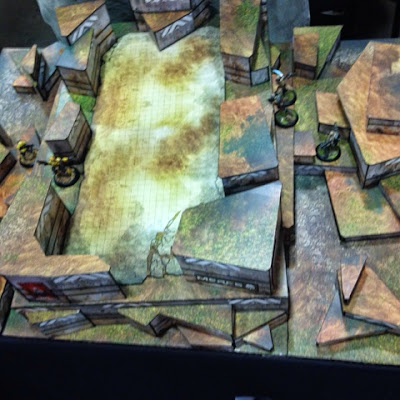 The guys who make MERCS had a very nice demonstation set up with this sweet 3-D terrain. 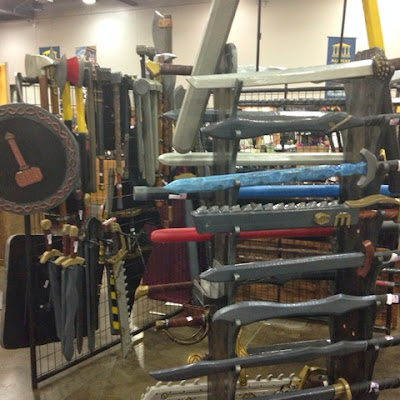 Foam weapons to beat the crap out of your friends in style and monies. 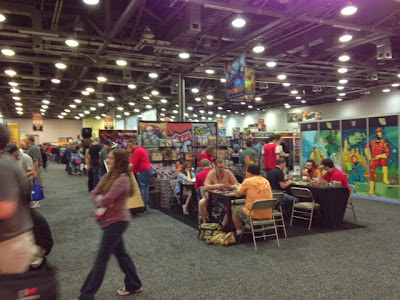 AEG's set up was literally right in front of the security kiosk I sit at. We had at least ten people as where they were. 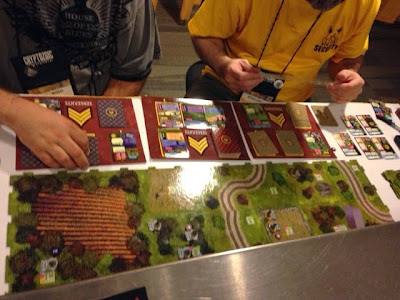 Sergeants is a great miniatures-board-card game that another friend William bought while he was there. We were playing it at midnight on Friday. I played Germans and couldn't hit the broad side of a Brit. In two turns I had one dead, one pinned, and two wounded out of seven soldiers taking to the board...how embarrassing. 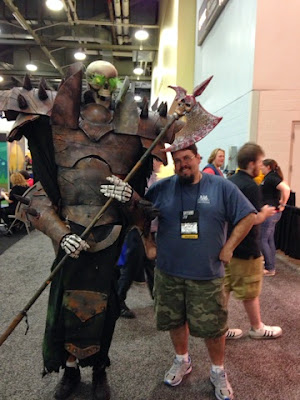 This is yet another friend, J.R., who entered the costume contest. He made this from scratch but the judges though he bought it in a store...what store sells these?! 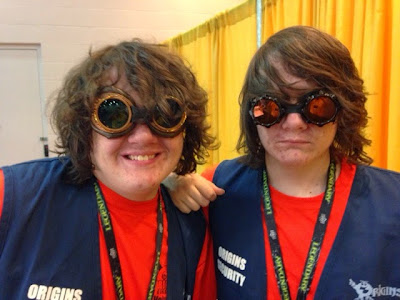 My Sons got the goggles they have wanted since last year. 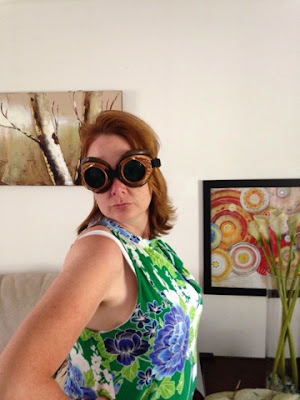 My wife got a hold of them at home ;)

She is going to kill me if she sees this picture on this blog.

Seriously, I leave my stuff to you 35 readers.

Posted by adeptgamer at 2:03 PM 2 comments: Links to this post 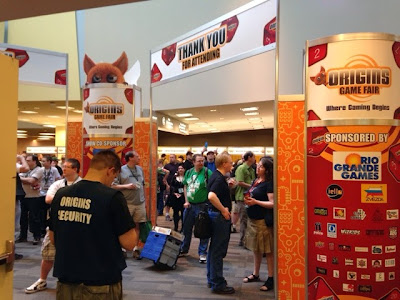 Posted by adeptgamer at 6:15 PM No comments: Links to this post

So the halls are filling up ...look. 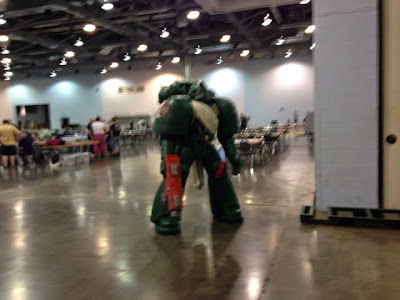 Posted by adeptgamer at 3:07 PM No comments: Links to this post

So this is my first day post. It's set up here in the exhibit hall and all is quiet. Take a look... 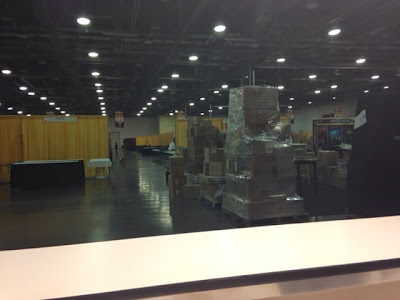 As you can see not much yet but hopefully it will be awesome tomorrow!

Posted by adeptgamer at 10:27 PM No comments: Links to this post

So tomorrow I go to Origins. I always say I'll do some kind of blog to update what's going on and I never do, but maybe THIS time I will! I have a new phone so hopefully I can use it to get some pictures and maybe video to you guys!

We'll see, either way if you are a reader of this blog and you're going to get there then please look me up! You can just go ask the security HQ where i'm at ;)

Posted by adeptgamer at 12:52 PM No comments: Links to this post