The Darkest Dungeon continues to entertain and surprise. I rarely buy into games early because I know that it is a huge risk. TDD drug me in because of the art work and side scrolling turned based combat more than anything. Initially I thought it was going to be too hard, but it isn't, BUT that could be because of the Stockholm-like relationship I have with Dark Souls.

Never the less it does have it's own flavor. The Warrens are filled with pig based monsters that are very disturbing. You have to play it to see it but the one that walks around on human arms while dangling a pair of pig legs under it is really on the high end of "wtf?!"

Then it does something like this...
...BEHOLD THE SWINEATAUR!!!

If you can't figure out which one it is I'm not going to tell you. That half Roman gladiator and half war boar is a delicious beast indeed! I would love it if they would release some card board stand ups of these fine creatures.

I killed it, then I killed another, and I killed a bunch more but no one leaves the Warrens without scars. I know this is basically shameful promotion for this game but I am not connected to it in anyway at all beyond being a player.  I cannot encourage you enough to go buy this game!
Posted by adeptgamer at 1:02 PM No comments: Links to this post

I just finished a fairly large project. Okay I finished it last week but I am just getting to blog about it. My friend asked me to paint up his Imperial Knight which I gladly did. He also paid me which was another glad thing. He wanted House Taranis and I did my best to accurately produce the desired product, observe if you will...

Sorry there is no front on picture, that was just so bad it wasn't worth posting at all. This took quite a lot of time and the decals were kind of hard to work with. I've done a lot of decals but several of these were decal within decal and that can be tricky. He did the sub-assemblies and you can't see it but he used magnets on the gun arm so that he could swap between guns allowing him to field both variants.

It was a very satisfying project over all and I did kind of hate to see it go out the door, but I have to admit I'm looking forward to facing it on the battlefield!

I've never destroyed an Imperial Knight, wonder how that will feel? ;)

Also I've kind of had an overwhelming desire to play Star Wars X-wing out of no where and scrambled to trade for some pieces. On Sunday night I got a bunch of players together at the LGS and we had some epic space battles. 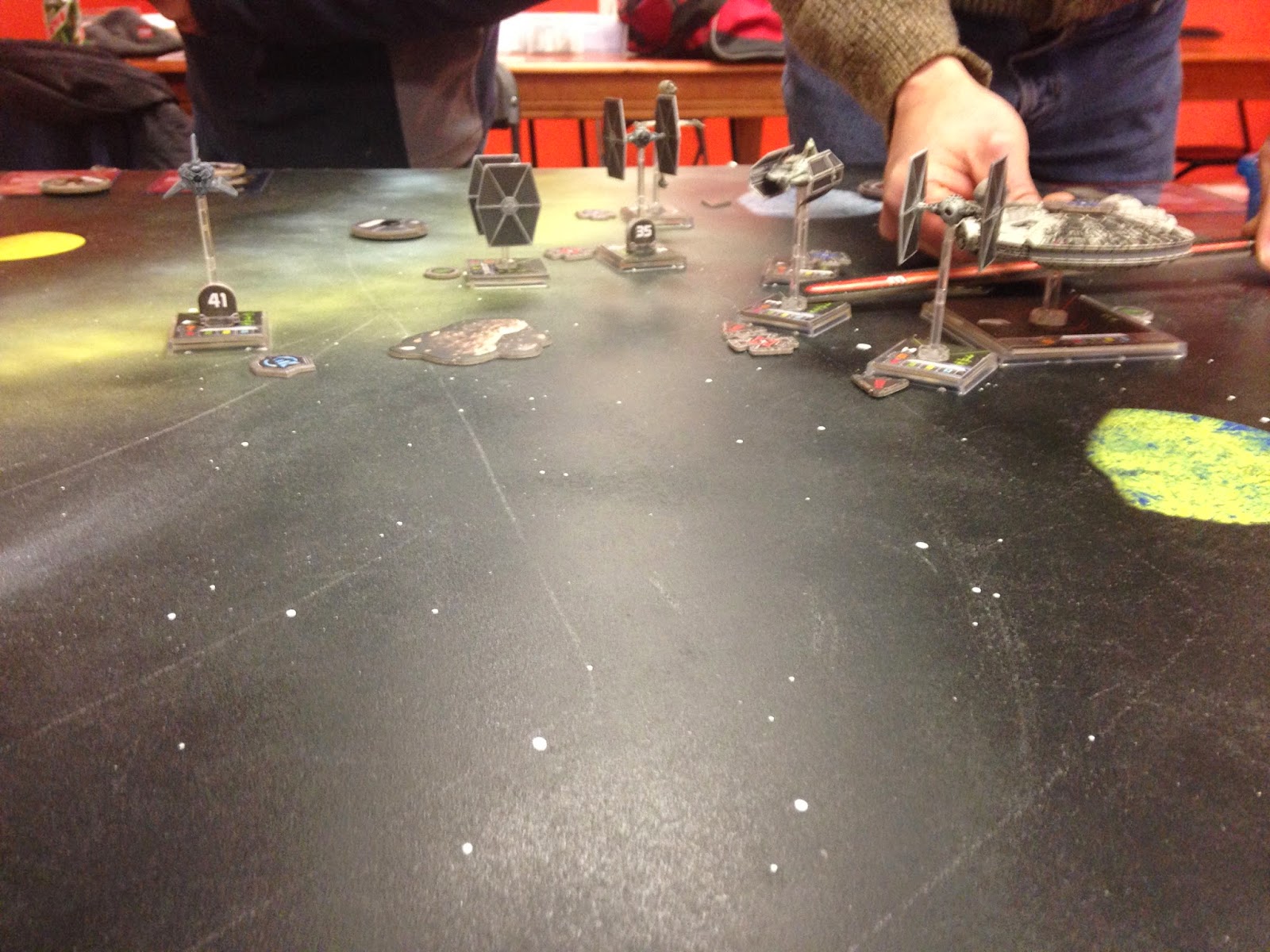 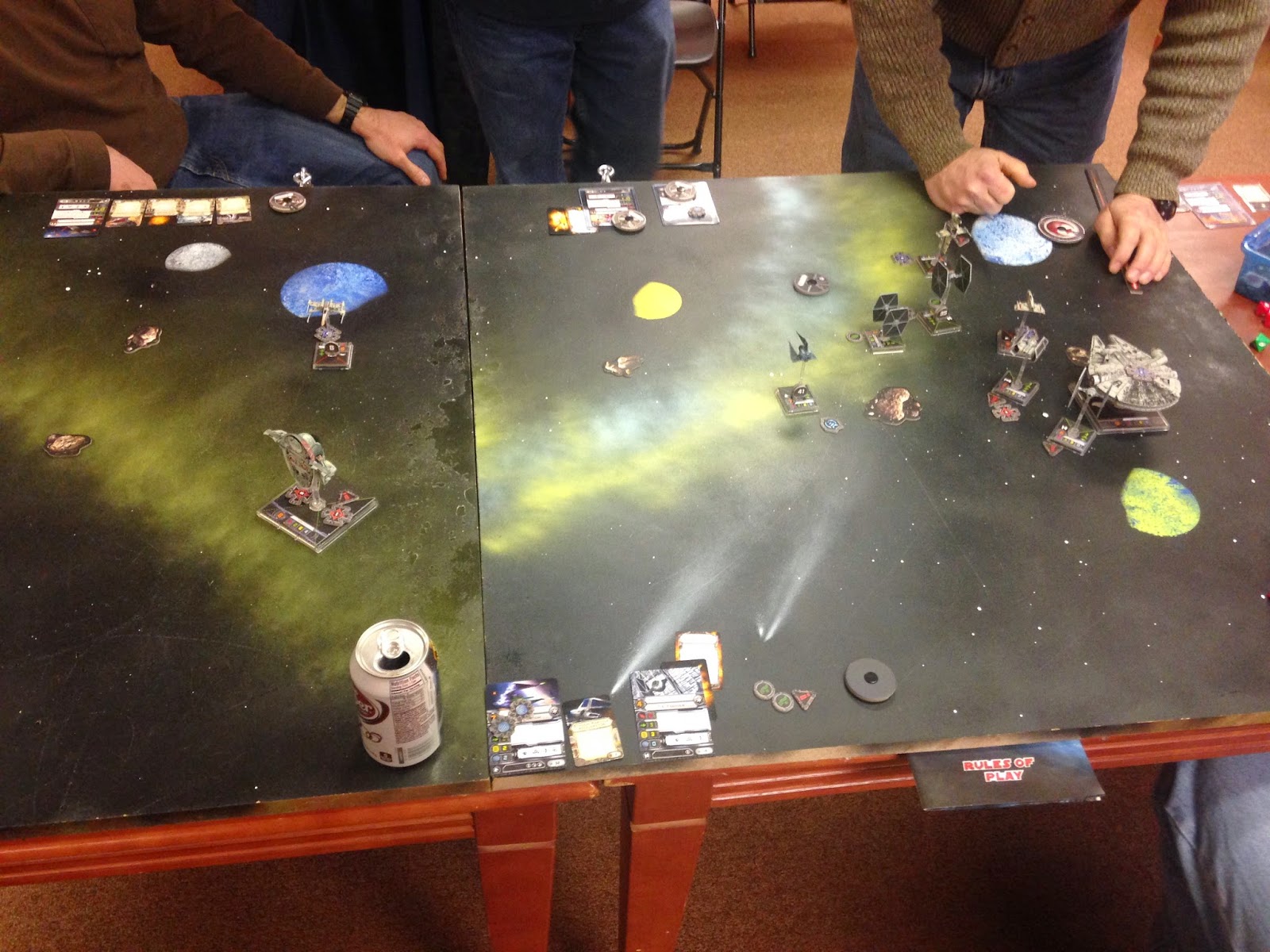 We played 50 point squadrons each and I took a Tie Phantom and Tie Fighter into the fray. I did okay, both of my ships survived. Which was pleasing since I had two other games that nighta nd both were horrible losses. I am really struggling with anger issues in my life right now. I don't mine losing, but I become furious with being so badly beaten I don't get to play. At some point you have to wonder who the hell balances this stuff when there are events like that in a game. I am at the point that I don't even want to win anymore. Just have fun and not want to hit something when the game is over.
Posted by adeptgamer at 12:58 PM No comments: Links to this post

I have been slowly working my way through The Darkest Dungeon and I've finally defeated the first of three  Swine Kings... 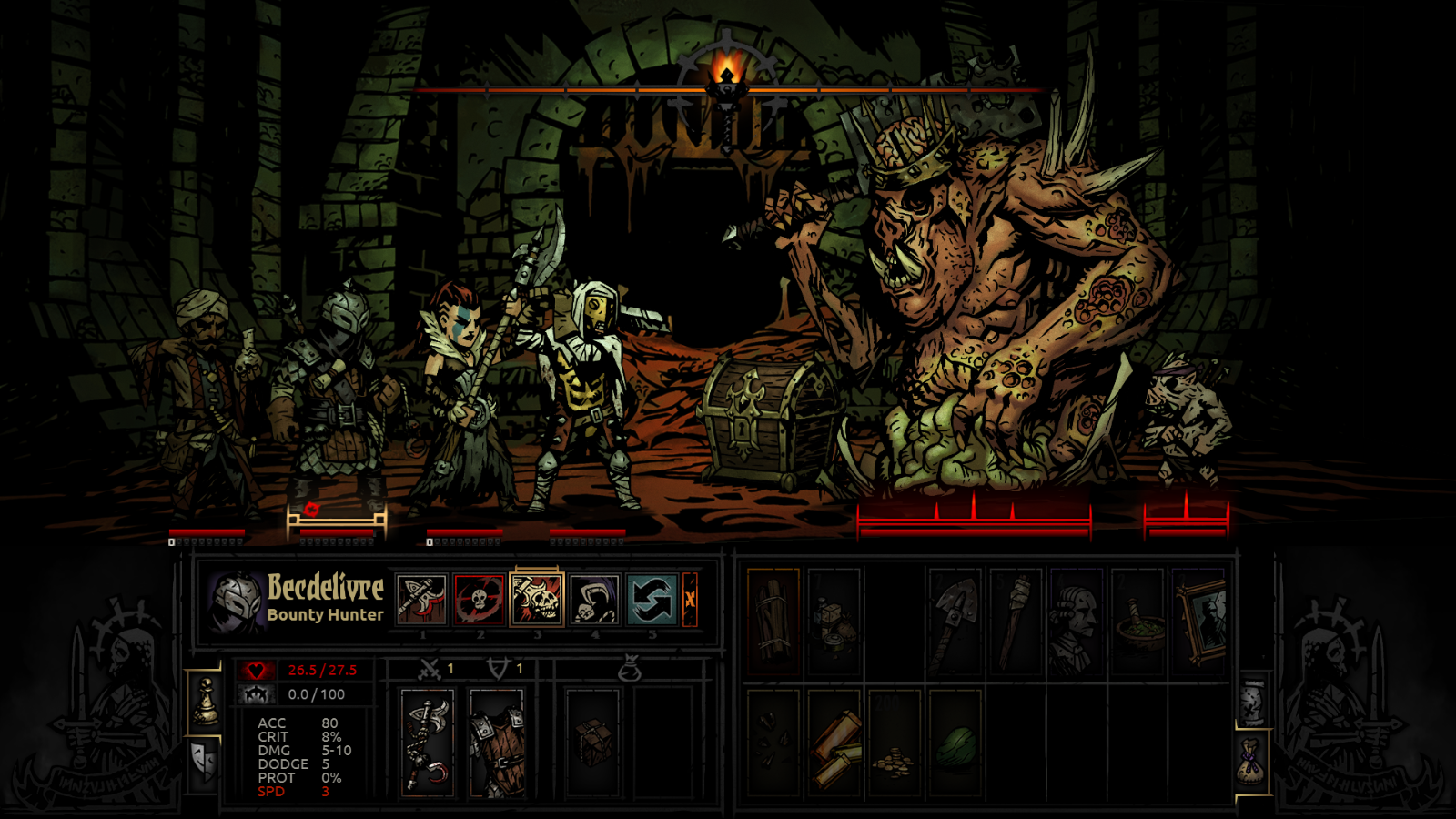 ...and if you're playing this game let me give you a hit. See that little bastard on the right, behind the absurdly gross Swine King...yeah him, don't hit him whatever you do.

Well until you kill the king then give him a little of his own medicine.
Posted by adeptgamer at 10:17 AM 2 comments: Links to this post

I have been working my way through an Imperial Knight for a friend but while I've been doing that I have also been working on a couple of my own pieces. 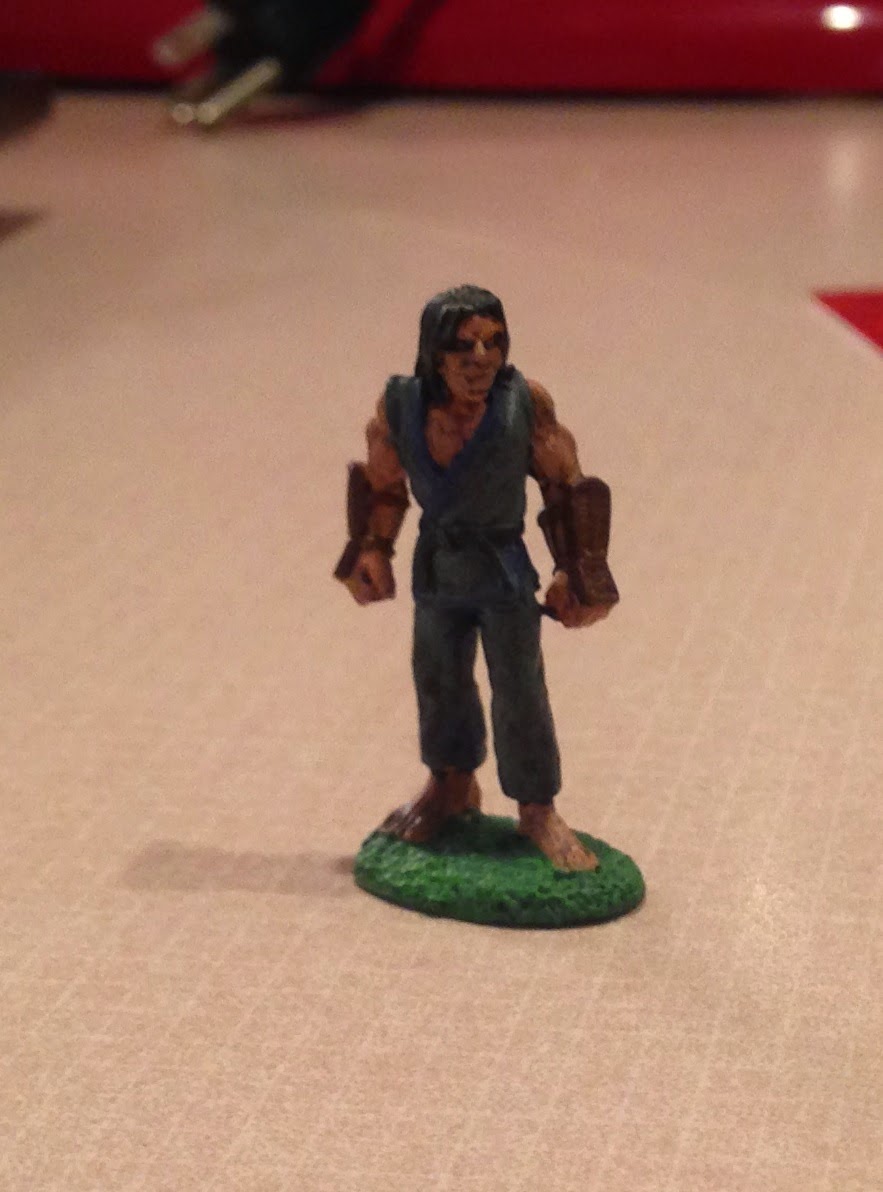 Needless to say, THIS, and this fine miniature is a character for a friend of mine. He has a hobby of making "broken" characters which is to say he likes making characters that are extreme powerhouses within the limits of a role playing rules set. This is also called "min-maxing" and I don't have a problem with it as a game master. I want characters to be powerful and players to feel like they are getting something over on me. It makes it easier to draw them into traps and allows me to throw powerful monsters at them without hesitation. Originally he wanted me to dremmel down the army bracers but I didn't because I realized that if I did they would lose all definition.

Also we have this... 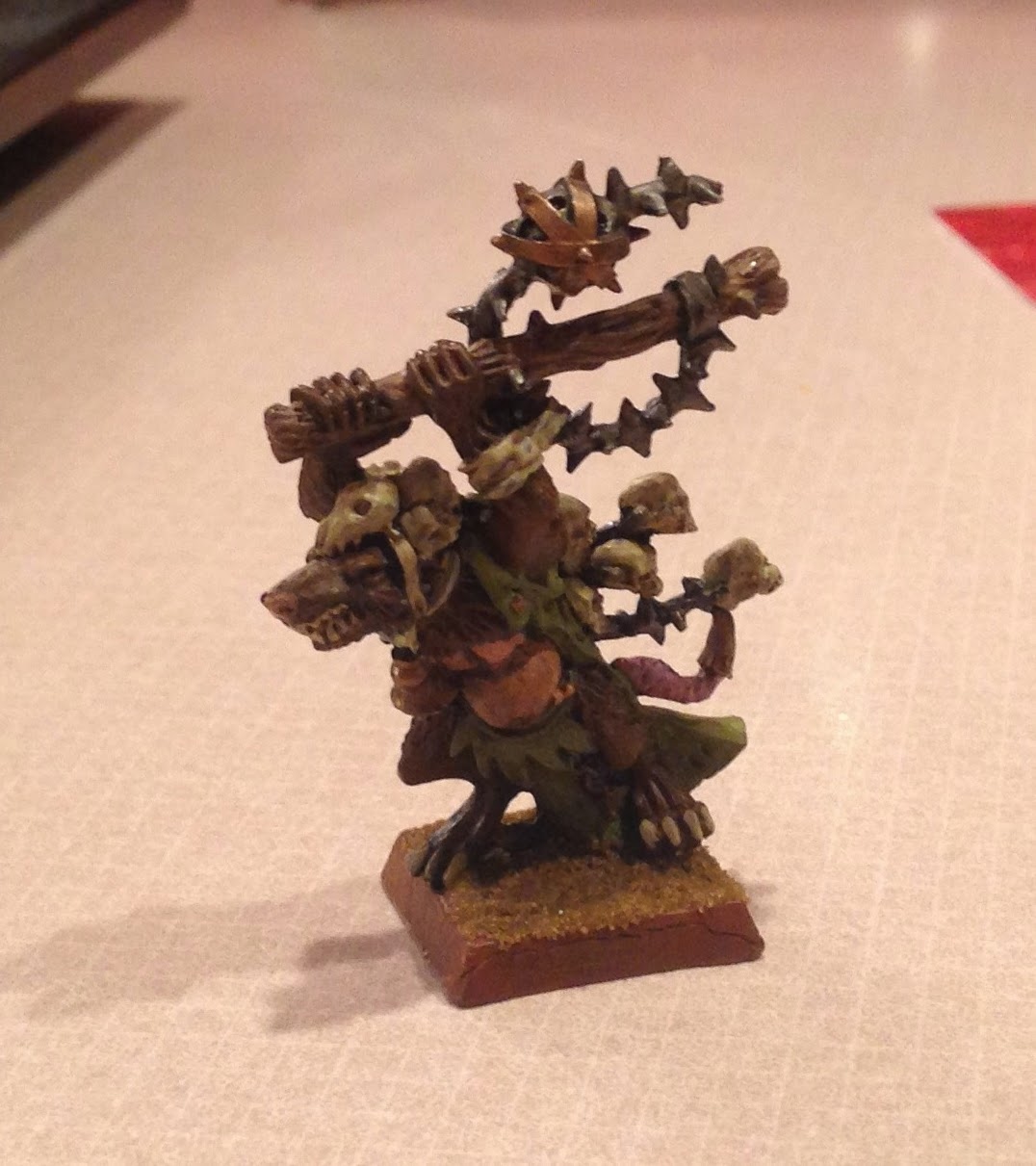 A Plague Priest for my slowly growing collection of Skaven. Originally he was to be the start of a slow grow event but it kind of petered out. At the very least I got this guy completed and the next time my Skaven take to the field they will have another wizard with them.
Posted by adeptgamer at 10:28 PM No comments: Links to this post

The Darkest Dungeon by Red Hook Studios released for early access on steam yesterday and I cannot encourage you enough to go and buy this game and play it a lot.

Well that is if you like roleplaying games, great art, and challenge.

If not then, well, nothing to see here.

I've played about three or four hours of it so far so this would be classified as an early review of an early access game. I have been following Darkest Dungeon for over a year now waiting almost impatiently. I love turn based games and I love scary dark roleplaying games. The C'thulhuian over tones are something I also really appreciate in a game as well as the variety of strange characters you can play. Rather than rambling on I'll hit three specific things about the game that stands out.

Number 1: It is beautiful! 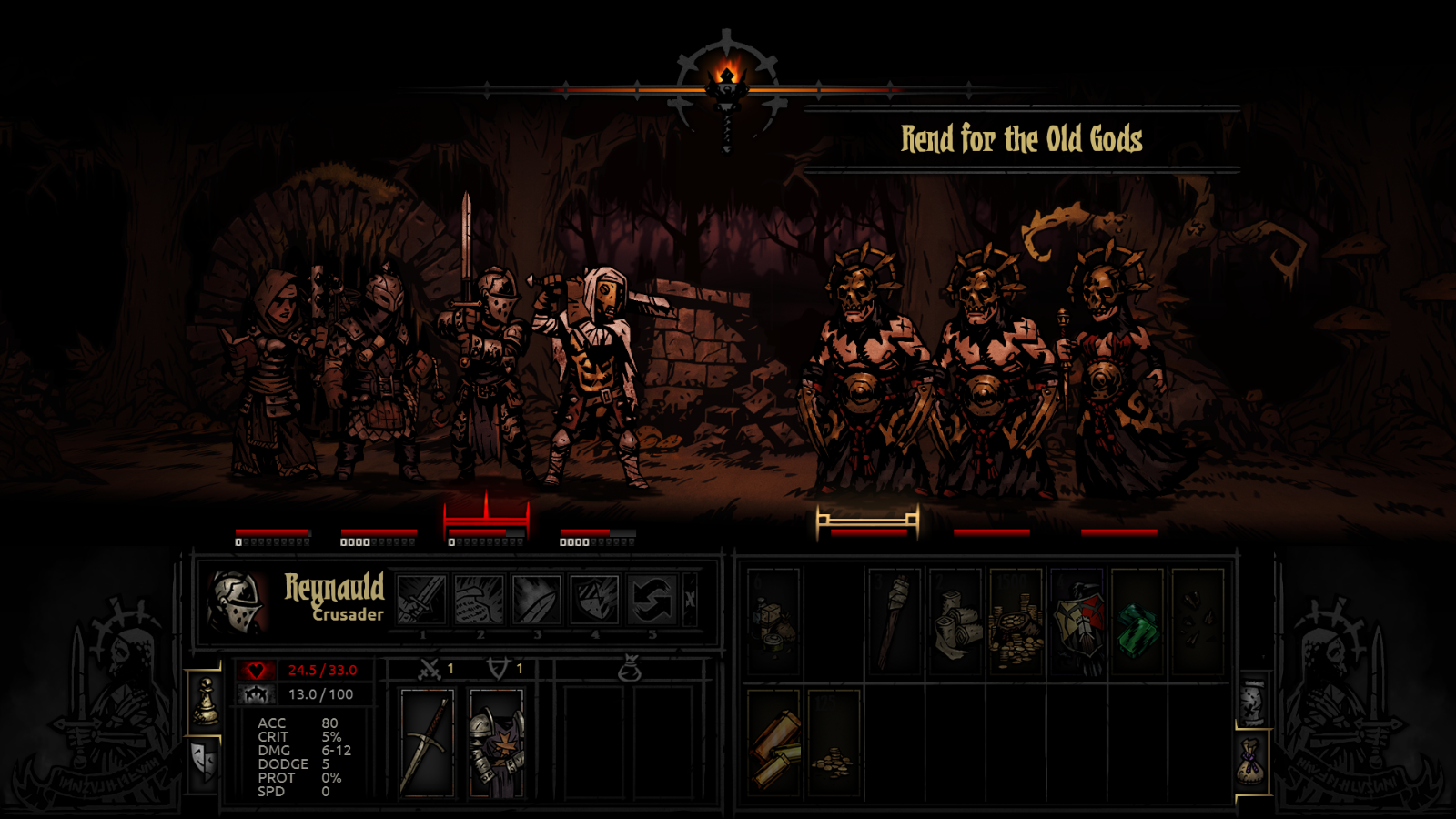 This is a screen capture from the game I was playing and you can see there is a lot on the screen but it is all done in "crow shaw" style art. I love this style of art and the mood it gives and this game is steeped in excellent examples of the style. You can find dozens of pictures of the game on line but I am posting this one to show that in play it holds up. Those were not doctored pre-release versions. Some people will point out that it is highly monochromatic and I will not disagree. I believe that is intentional and meant to affect your emotions giving you a blah feeling. This is a game of hopelessness (and over coming that hopelessness), struggle (and success), and fatigue (and recover) so the creators are probably trying to instill some of that in the player rather than just tell them about it. 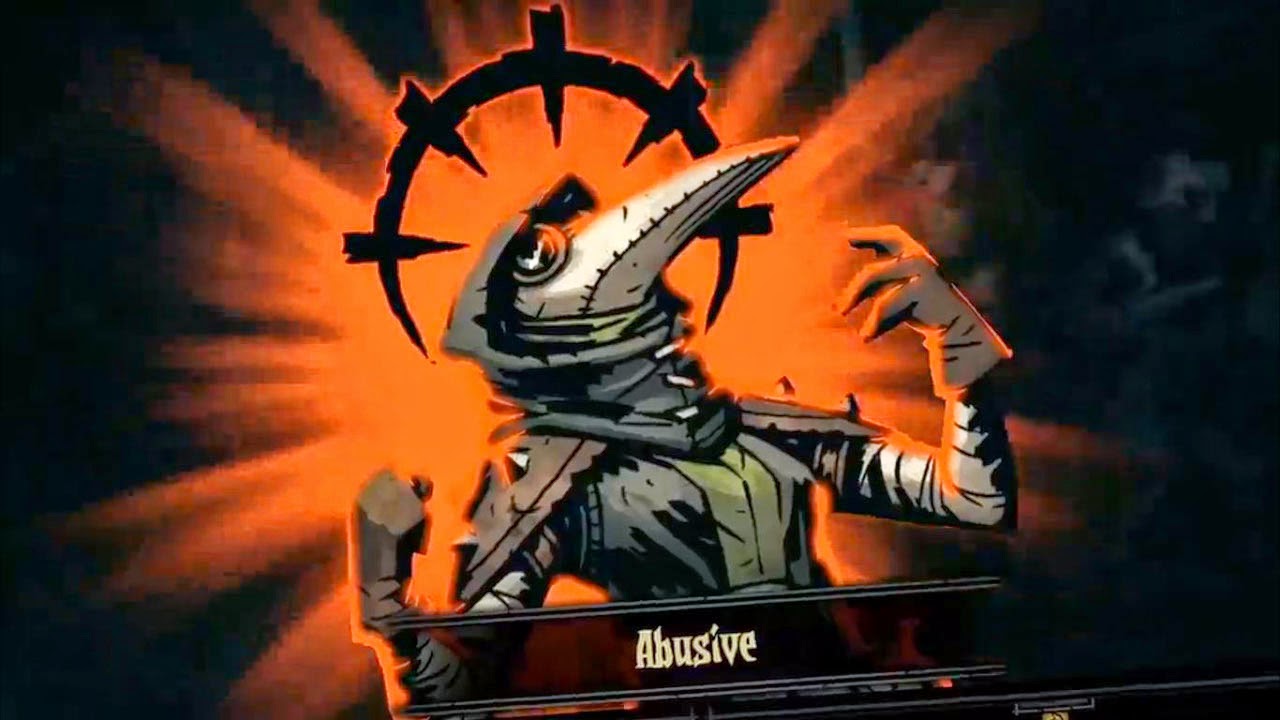 The first thing that stands out is that healing is rare and hard to come by, and you need to heal both the body and the mind of your characters. A few characters have healing skills but these are only use able during battle. There are no healing potions or salves that I've encountered yet and while eating food does heal you it only heal 1 point (2 in some characters) and you need it should you become hungry during your adventures. To be fair this might be a little too hard. While I am a fan of challenge I am not a fan of insurmountable challenge. Dark Souls has taught me to be cautious with my resources Darkest Dungeon is not even letting me have resources to be cautious with. In general the damage is of a much higher put out than the recovery and is making it hard to progress or not feel like I'm going to lose all the time. I'm persevering though because I have hopes that past the initial challenge is a land of milk and honey: milk for my hit points an honey for my stress points.

Number 3: The characters are actually characters. 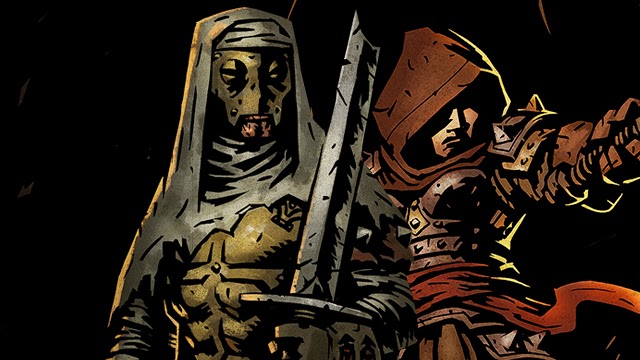 Even though it would be easy to point out the classic tropes (oh look a fighter!) it is really more valuable to realize that rather than try to avoid the tropes (which really you can't avoid) they have decided to develop the tropes into characters and they have done this well I think. Yes you have a cleric, but it is the Vestal in this game (implying a chaste character). You have your rangers but they are Bounty Hunters. You have your fighters but they are Crusaders. Then you have things like the Leper which is just...well its just cool to turn a leper into a viable character for an RPG. In fact the leper may be the MOST viable of all the characters considering his self sustaining nature. You get a roster of characters, which you need to replenish as they die, and they WILL die. So don't get attached to more than one or two. I am actively trying to build one or two up on the sacrifice of others.

Over all my first impressions of Darkest Dungeon are positive. I think there may be some game balance issues, but maybe not. Maybe Red Hook wants you to struggle hard, so hard that few complete the game. I'm no sure that is a viable marketing strategy but it certainly isn't new. You can find a bevy of hard as hell games that are played simply because it is hard. Dark Souls used to fall into that category but it's fear has been largely contained so that even the casual player can have fun with it.

There is literally another dozen things that I could add to this list; provision system, side scrolling exploration, the monsters alone! But I think it is best to impose a limit to my initial gushing. Final word is that you go play the game yourself though. Twenty dollars isn't much for a good game and this is a good game even if it isn't your cup of tea.
Posted by adeptgamer at 9:27 AM No comments: Links to this post