Soldiers of War: Past and Future

That totally sounds like a title to something doesn't it?

I just googled it, it isn't.

Anyway I have finished (for now) my Bolt Action collection for my army of Great Britain! It is a very exciting event for me. I love to "complete" armies and then set them up and see my beautiful force ready to roll into battle. Please allow me to reveal them to you now! Gorgeous are they not? It is a mix of Crusader miniatures and Warlord Games miniatures. I got the Crusader British in a trade a while ago and it began my desire to build them into a Bolt Action collection. The Cromwell in the back is obviously a great piece for my army but in a previous post I pointed out it is my first British tank model I've ever done. I was surprised that all this only game to around 650 points though. 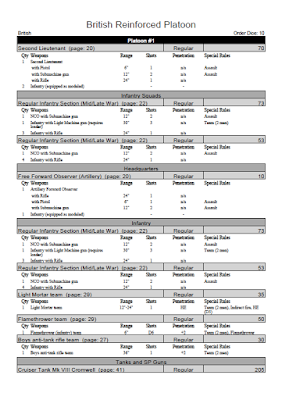 If you're interested here is the roster. Basic reinforced platoon but I think it's pretty solid. I'd like to add an artillery piece to it and some Bren carriers with squads. Maybe mix these four sections into two sections with the Brens as support. I'm eager to get them on the table and see how they perform before adding more though. 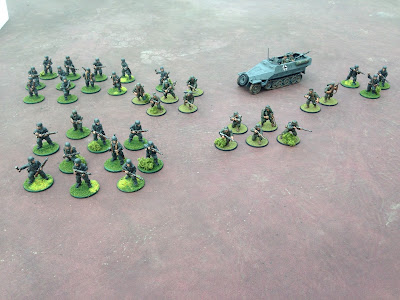 Again this is a mix of Crusader miniatures and World Games. The demonstration consists of two five man squads, a Hanomag half track, and a two man squad for leadership. My two infantry squads and personal command swells it nicely, actually to almost the same points as the British, but they lack the tank and weapons teams.

Finally we will zip to the future. Two friends and myself are participating in the idea of a "new year new army" build and I am doing Astra Militarum. I am buying into the idea of a mega tank being supported by a lot of infantry and my primary goal is two infantry platoons to accompany the mega tank. If I can afford it in points i'm going to also make sure they all have Chimera transports but we'll see what fits. Here is the accumulated infantry thus far... 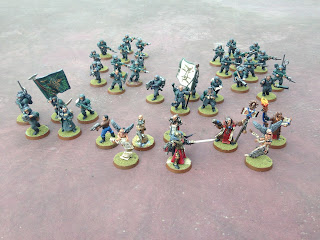 This photo also includes my inquisitor with his henchmen. Some of the henchmen will find their way into the AM as priests, because they are. I'm pretty happy with how the progress is going. My paint scheme is pretty doable and the idea of fifty plus infantry facing down my foes is exciting. I know the casualties will be horrendous, but this is what the Imperium is made of my friends!

On the board right now is some American GI's for the demo kit and some Gates of Antares. I am hoping to have those done in a few days so that I can move on to some fantasy figures.  Until then I hope your dice favor you, your tactics are well planned, and your model kits are complete!
Posted by adeptgamer at 12:06 PM No comments: Links to this post

Bolt Action and Ready Player One

I play a lot of different games and if you are like me you struggle with the same thing I do. You have so many games but so little time that eventually you know you aren't going to get to them all, literally, before you die. So my solution has been to parse down a bit and try to focus on just like...fifty of them.

Yup, right around fifty games should be doable.

So anyway one of the games that I've always had some interest in because of my general interest in historical war gaming has been Bolt Action. I've always liked the scale and after obtaining a rule book for free from volunteering a few years ago I really liked the rules. I've brought it up a few times to my friends and I've slowly grown a British and German collection to  have a little bit to play with.

Recently a local game store began to carry the game so I have been able to decidedly add to what I have and am on my way to a nice British force. In fact I recently completed my Cromwell tank... 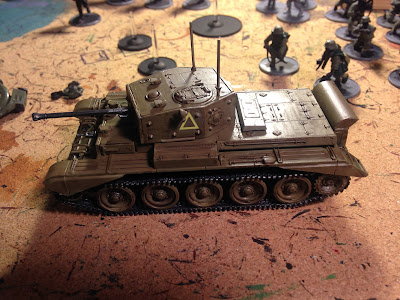 She is a beauty isn't she? I haven't dirtied up the tracks and rollers yet but i'll get to that probably. It's my first piece of British armor in my entire model collection so it holds a kind of semi-special place you know.

Also a local toy soldier shop is beginning to sell Bolt Action and I'm painting up their demo set for them. I've completed the Hanomag and so of course I've got to show it off... 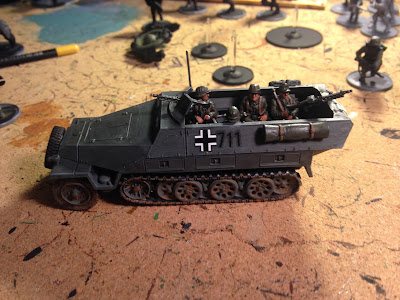 A fine piece even if I do say so myself. I like how the kit has troops you can put in the back but don't necessarily have to put into the back.

I'm looking forward to getting to play out some nice mid-war games against a local player. I need to add to my Germans since he is also a British enthusiast but my main collection will be the Brits for sure. To date I have a nice collection that rolls in around 700 points if they are all regular that includes;

I could and probably will split the two rifle sections into four rifle sections since I have 10 soldiers in each. That will give me more order dice and tactical options.

My real hope though, if i'm completely honest, is to find someone to begin the collection of Black Powder American War of Independence with me ;)

The war gaming aside I just finished a fantastic book according to who you are. Ready Player One by Ernest Cline is a really good read if you are around my age, Generation X so to speak. It is filled with my childhood and teenage years. The material and references strikes deep into my nostalgia and made me smile and feel like a man filled with something valuable which in general is something I don't feel at this point in my life. The writing is really solid and enjoyable but if you are too young or too old you might not value some of the references which isn't necessarily a bad thing it just means you won't get as much out of it. 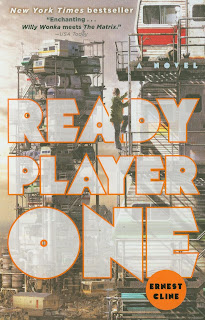 I will say something for Mr. Cline though. A small part of me hates him and I think I always will. He has, "literaturely", cashed in on my nostalgia. I don't hold that against him. I just wish it had been me. Who wouldn't feel this way. He has taken a childhood that is almost the same as mine and crafted it into a beautiful story that had an emotional affect on me which not all writing does. Further I try to write short stories and fail so much at times it feels as if there is no point to keep trying.

It is a wonderful book. Not all books can make you both admire and want to murder the same person, I hand Mr. Cline an honest to goodness pile full of acclaim for that. Even if it is just from some middle aged blogger lost in mediocrity. Even token counts doesn't it? And if you read the book you'll get that.

Posted by adeptgamer at 11:55 AM 2 comments: Links to this post

Where has the time gone?

A lot has happened in my life since last September. The vast majority of it has nothing to do with this blog or the hobby it revolves around so i'll not write about it here but some of it does have to do with the point of this blog, which I sometimes forget.

The "new year new army" disease has taken a firm hold in my hobby groups and I think it's been a good thing in general. I have started building the Astra Militarum army of my dreams and on top of that working on adding to my Bolt Action British and German forces. Also I am starting to play around with Beyond the Gates of Antares as well as keeping up on my X-wing skills, fiddling with some Star Trek attack wing, and usually playing a weekly D&D session with my sons.

Quite a handful I know!

My dream AM army involves a lot of infantry. I'd always liked the idea of an army of basic infantry men with their transports confronting terrible enemies like Tyranids and Chaos where it would seem their is no way they could be victorious but through their rugged bravery, combined firepower, and guts they are able to overcome. I decided I should have at least 2 infantry platoons and not take the short cut of 2 veteran squads to fulfill my troop choices. That means the core of my army will have fifty soldiers and six tanks.

I've painted up a couple pieces of armor that I got in trade so far... 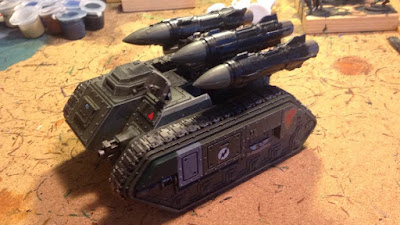 This is a Manticore I got in trade and while it doesn't fit my original plan anything festooned with huge missiles I will find a place for. The front side panel has my army colors; Caliban Green and Codex Gray which will be the standard for the infantry. The tank itself is actually "German Field Grey" from VMC an I think i'll use that for all of my non-transport armor. 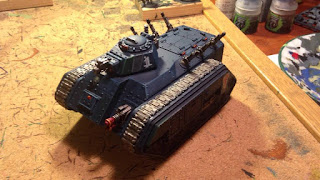 This is "Midnight Blue" from Delta Ceramcoat brand. I am going to make all the transports this color and have the heavy flamer forward mounted. If I recall the rules right I should be able to move 6", shoot the multi-laser (or heavy bolter in this case) then fire my heavy flamer as well. With a full unit in one that is also another two guys shooting from the access point and another six from the mounted lasguns. That is a lot of firepower, not strong enough to take on the likes of a Wrightknight or similar epic size enemy but I have a Hellhammer for those.

Also I'm going to mix in some Imperial odds and ends such as the assassins and the Inquisition. In fact I plan to use an Inquisitor as my warlord for the army, some kind of story about him taking control of the Astra Militarum to fight chaos or what have you. 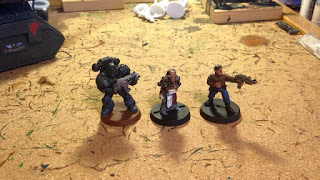 Here are a few pieces I'm looking to add in. The space marine is from the Dark Vengeance box set and I think i'm going to mix in that squad as a dying chapter that have sworn themselves to the Inquisitor's cause. The other two are for the inquisitorial henchmen band or maybe as other AM characters.

Well I think that is enough for now. I could go on about my Matilda tank in progress or my thoughts on the Ghar from GoA but I don't have pictures of any of that yet so I'd rather wait until I can accompany text with photographs.

If you've read all this I'd like to take a moment to thank you. There are a lot of blogs out there and many are more impressive than mine. I'd like to think what mine brings to the world is the feeling that anyone can get into this hobby and have fun with it.

So until next time, I hope all your dice roll good for you...unless you're playing me ;)
Posted by adeptgamer at 9:34 AM No comments: Links to this post