That is an extreme title isn't it?

But as titles should be succinct I feel like that is the best I got in this case. I don't plan to ramble on but I do want to put this out there to maybe stimulate some conversation. Also I don't know if this issue i'm about to bring up is a localized one or a global one considering our community of hobbyist.

The issue in short is...

Fantasy gaming has become so branded that we are losing our creativity and the fantasy that made it fun. I may just be deep in nostalgia so as always take me with a grain of salt. A little history is in order to get where i'm coming from. I started role playing games (Dungeons & Dragons) at around 10 years old with the Keep on the Borderlands module. I started painting miniatures at about 16 years old, my first finished miniature was a Troll by Ral Partha (seen below and formerly posted on this blog). My frist card game was Magic the Gatehring at around 16 asa well. My first war gaming experience was Warhammer Fantasy Battles 5th edition (the lovely set with Lizardmen and Bretonnians) and from that point my gaming entered what I would call the "maturing phase".

So my back ground is pretty solidly grounded in the famous brands. DnD, Games Workshop, Magic, these are the core of gaming in general. All my initial learning was from these companies and my community which was limited to my college friendships and the off and on LGS friendships as the LGS's opened and closed in my area.
But as I have grown as a hobbyist, gamer, what ever you want to call it, I have come to realize there was a wild frontier at one point where fantasy gaming wasn't branded and these brands that are so dominant today were only one of the strange beasts out there.

If you get that then you are on my page, if you think i'm crazy then either i'm crazy or you're not on my page.

I feel like the pioneer spirit has been lost in contemporary fantasy gaming. Where before game masters and players built elaborate or daring fantasy war games with scenarios or orders of battle, now they willingly limit themselves to the branding's structure and therefore limit their creativity.

Age of Sigmar is a good litmus test for this. I've not played AoS so i'm not talking about how it plays. I've read through the 4 page rules set and honestly it was mixed feelings on my part. I'm not a fan of it, not because of the rules being 4 pages but because they sacrificed a fantastic game and model line for it.

The litmus though is the rules of army building. Or more specifically the lack of rules for army building. I liked those aspects as the advent of points system has created a false idea that fantasy gaming is symmetric warfare (which it isn't) and that you can design something to balance something as wildly various as trolls and elves and dwarfs and whatever else with out a referee to impose some situation based common sense (which you can't).

Since that game launched people have been trying to find a way to apply a points system to it. Which is not only unnecessary it also absurd considering the power level of the little plastic men and the designers obvious intent for epic wild battles. 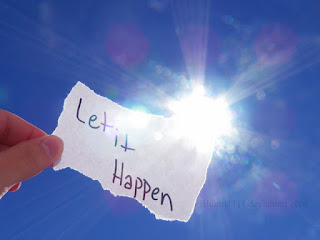 But back to my point. 30 years ago no one would have batted an eye about this. They would have just started collecting models and played with them. Hell they would have played with any models to play the game just to play what they wanted to.

Look. I can go on and on about this. Really. I'm a talker. But I feel like I got the gist of my point across. I have been looking into re-pioneering my own gaming and hope to have some kind of interesting battle report/rpg/war game/thingy to post on here soon.

Until then I hope this generates some thinking and conversing. Also I hope all your dice roll in your favor ;)
Posted by adeptgamer at 2:31 PM 5 comments: Links to this post

Beyond the Gates of Antares

If you haven't played Beyond the Gates of Antares by Warlord Games (which I will now permanently shorten to "GoA") then you owe it to yourself to find someone with some and play just one game. It's a very good game, very fun, and fresh in a few ways. Some people I've talked with refer to it as the sci-fi Bolt Action but that really isn't true. They share a single mechanic in the form of the order dice but that is really where the similarity ends. Really people are picking up on the tactical style of game play they both exhibit which is less about overwhelming your enemy with super weapons and mega units and instead not screwing up.

Which I am not good at. I excel at screwing up.

I have the starter box for GoA (see I did it) and it is a really nice product. A lot of people have reviewed this so feel free to look that up but in general it is worth it's price hands down. I've finished a few units so let us take a look shall we? 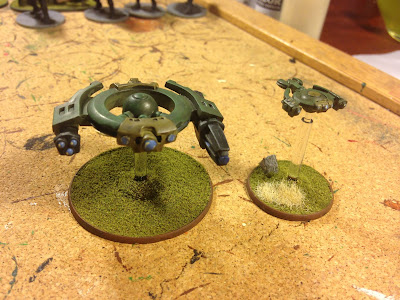 This is a light support drone for the Concord faction. Basically it's a mobile, AI controlled, weapons platform. Kind of like the Eldar heavy weapons platforms but independent. It has a spotter buddy drone with it. The Concord faction has a lot of buddy drones and the spotter basically gives you a re-roll on an dice to hit so that is worth the points. 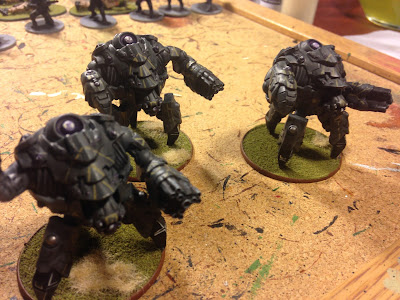 The box comes with two Ghar units; a battle squad and an assault squad. This is the battle squad with it's less big claws and bigger gun. That gun arm is surprisingly adaptable with three fire modes making an army with limited unit options versatile enough to play well. Also they are nearly impossible to kill without some really heavy weapons. I went with a much darker armor scheme than you'd see in the promotional pictures. 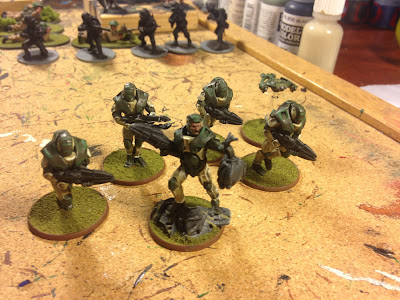 This is a standard Concord unit. Well not standard as the guy holding the head of a Ghar battle suit is a named character but he is equipped the same. They are carrying standard plasma weapons and the guy in the back has an upgraded version of that weapon. Also you see a handy buddy spotter drone over the guy on the right's shoulder.

Also in the back you can see some U.S. GI's getting painted up.

My color schemes are pretty simple, easy to complete, but I think they will come together nicely on the table.

If things go well I should have a small GI force ready to show off soon and a squad of dreadnoughts for my Ultramarines. YES an entire squad!
Posted by adeptgamer at 9:44 AM No comments: Links to this post