I have not really gotten to play much Kill Team which is a shame because it's good "invocation" of the Warhammer 40,000 larger game. I'm excited for what the development of Kill Team means for bodes very well for the upcoming Apocalypse rules set.

Anyway Inquisitor was an excellent 54mm table top rpg war game that didn't succeed well enough to find it's way into plastics but it left a taste in gamer's mouths. That was the taste of independence and creativity that can be used by everyone and not the vaunted few. I'm working on producing some pieces for narrative Inquisitor style Kill Team games, and if you're okay with it, i'd like to share :) 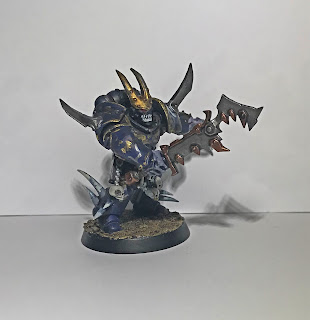 This is Gygrax the Eater a possessed Primaris Ultramarine that wields a daemon weapon. It was made from a single post Primaris Intercessor with bits from the Possessed kit, Beast Claw Raiders, and various spines from the Flesh Eater Courts. I think he turned out pretty solid with enough chaosiness to make it clear what he is but the residual blue and gold of the Second Company to see his origins. 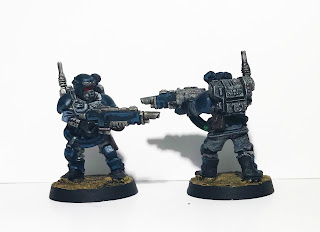 These are a couple of Agents, the original elite veteran Astra Militarum and one of my favorite models. Not modified at all I just want to show off the paint work which is meant to be very non-committal. I could use them as Inquisitor agents, Administratum agents, bounty hunters, etc.

I've got some Primaris i'm working on that were never placed with a chapter and instead act like knights errant, also a converted Saurus warrior as an alien mercenary, and a possessed chaos sorcerer.

I hope you enjoyed my post and I hope maybe it inspired you a bit as well. :)
Posted by adeptgamer at 10:04 PM No comments: Links to this post

It smells funny in here.

I do my best to limit my model collecting to a reasonable level of purchase. I fail, you fail, we all fail but I give it my best. I am trying this thing where I have one Xenos army, one Heretic army, and one Imperial army for Warhammer 40,000. Guess how that is working out? I will say that mostly in the Heretic/Traitor area i'm fairly focused with a growing collection papa Nurgle's Death Guard. It started with the acquisition of the Dark Imperium starter and has grown with the contents of another such box, some easy to build haulers, and recently a start collecting Nurgle.

Here are some low quality, badly taken photographs for you to squint at! 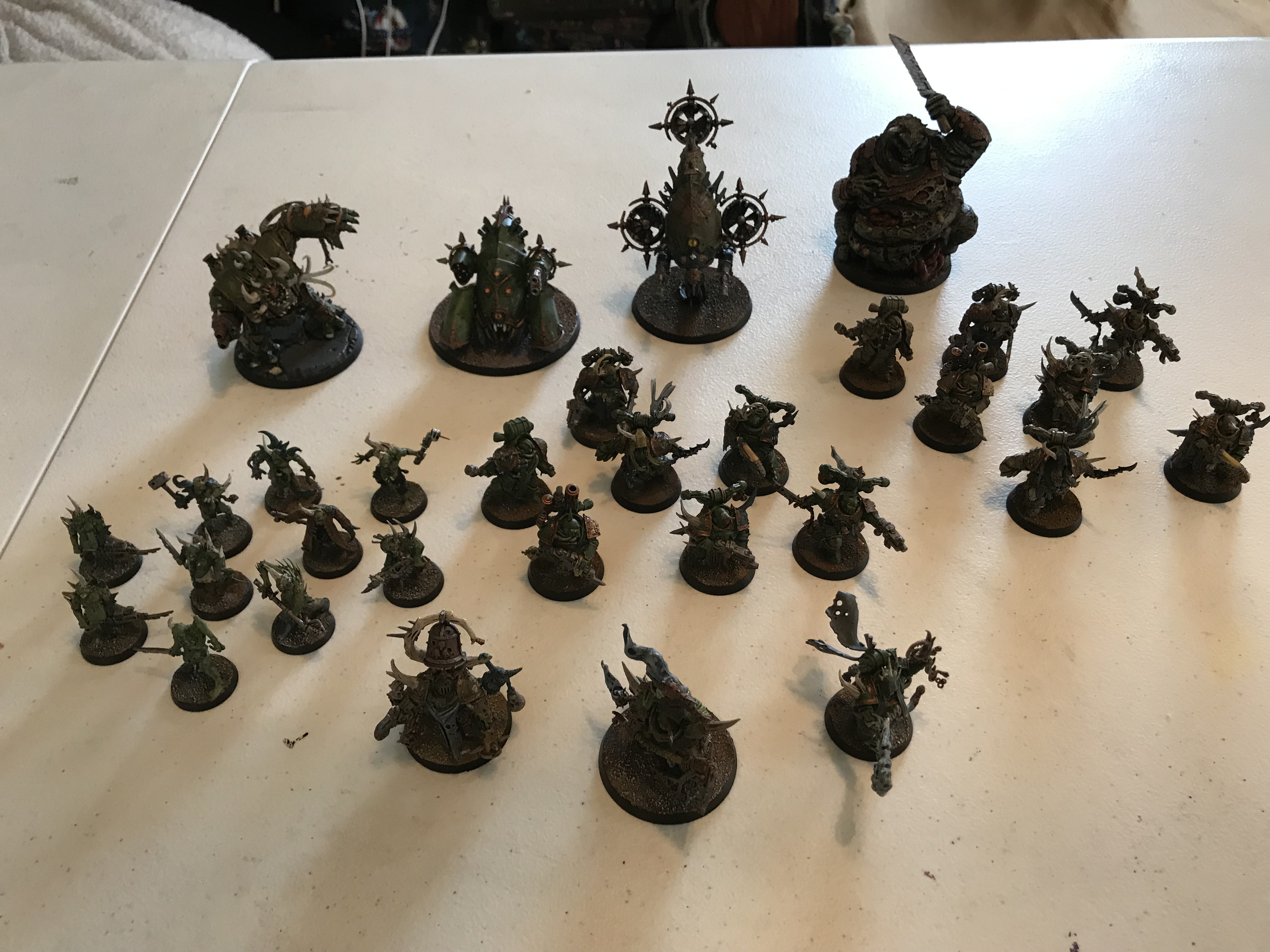 This is the collection as it stands with plenty of nice disease filled selection of plague marines and pox walkers with a nice collection of daemon engines to back them up; hellbrute, fetid bloat drone, and myphitic blighthauler. As command structure we have a nice lord of contagion, a friendly malignant plaguecaster, a quiet noxious blight bringer, and a chubby daemon prince.

I took others but frankly they are so bad no reason to bore you with them. I have more to paint and I am using a pretty simple system so they should come together quickly enough. I'll practice my photo taking and maybe I can do better next time :)

I played a 700 battle versus Tyranids and they beat me soundly. We played points, but we used open play cards, then he didn't think it would be fair for me to summon daemons, THEN it was double objective twist, THEN there was no way in hell I could score either of them. LOL! I did few casualties, lost most of mine, and ultimately looked the fool. I still had fun though and got some of a read on how to play this army.

Posted by adeptgamer at 11:52 PM 2 comments: Links to this post

Almost three years since last I posted on this blog. A lot has happened. A lot of bad unhappy things. This blog isn't about bad unhappy things though so I won't be sharing those things. I will be sharing other things, many of them sooner, some of them later. I have been playing a lot of Dungeons & Dragons, hell i'm swamped in it and it has spurned a lot of nice miniature painting. Also I as very pleased to see the re-release of Titanicus, a game I missed out on before but am not this time. I'm looking forward to posting again, and I hope it has some effect in improving my writing again.

Anyway that is boring, look at pretty stuff!

I obtained some Custodes kits and it was evident to me that the Shadow Keepers was the faction within that was right for me. It's not a large number of models but if you are a matched play person it can calculate up to 1,750 points. I know it's kind of odd for Trajan Valoris to lead them and honestly I want to get another box of the Guardians to make a different general. But I'm not complaining, they have been fun to play. 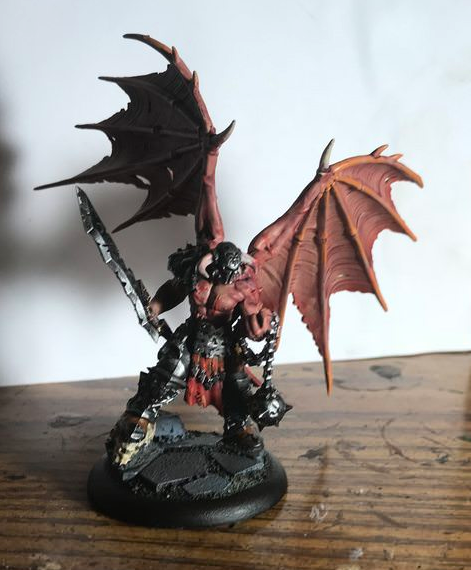 Some kit bashing resulting in a sweet looking daemon prince, or daemon, or something. I used it for an rpg scenario and the stupid players killed it in one round. Smh.

Little tanks! 15mm tanks, one of my favorite kinds of models. I am interested in large armor battles and there is no better way to do it. 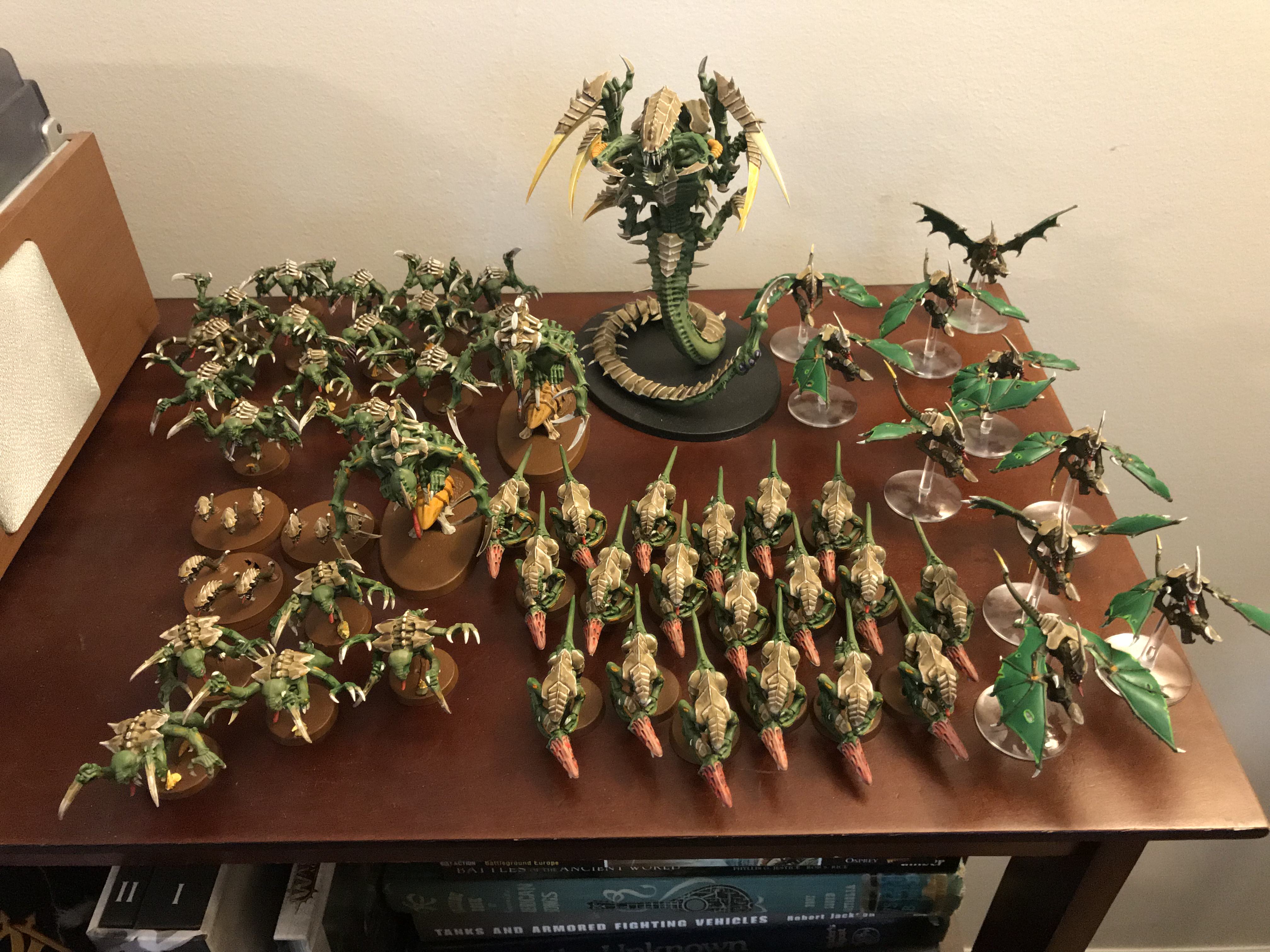 Tyranids collecting. Something I always wanted to do and finally started doing it. Hive fleet Ripley has been growing slowly and is sadly not based as I'm not sure what I want to do yet. More are under way including more monsters and some lictors! 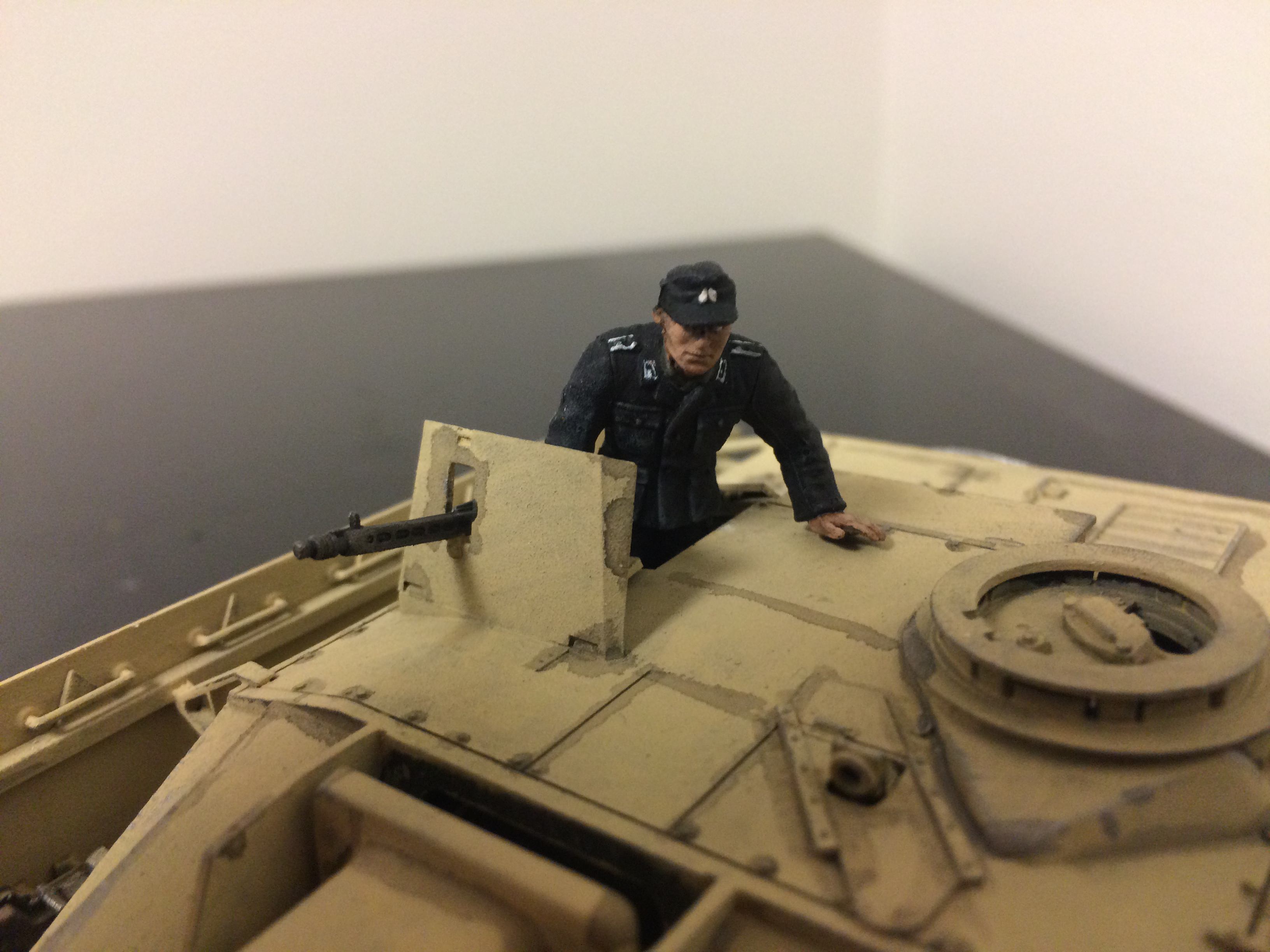 Scale modeling. I dabble in all of it and I never really know what's going to lock me into it's thrall and require me to finish it.

I hope this preview has been pleasant, and I hope you are happy at my return. My goal is to post something weekly at the least, preferably finished models or projects under way, or even cool rpg maps I've made.

And because it's been so long; May your dice always roll in your favor!
Posted by adeptgamer at 8:25 PM No comments: Links to this post