My name is Adeptgamer, and I have a model buying problem.

Miniature wargaming is a hobby that is so hot right now everyone's credit cards, bank cards, wallets, purses, hand bags, back packs, hell even ATM cards are burning. The companies that produce miniature for everything from 15mm World War 2 to grim dark sci fi are making better and better models with great offers to entice you. It can be a little overwhelming. We all have to find a way to cope. Some do this through focusing on one company, one collection, one faction/nation, a budget, or other strategy. Other do this through making arbitrary, but valuable, rules that monitor their purchasing such as painting a kit before getting a new one or selling old models to buy new. These are all admirable and I think it's great. We each have to find out path.

I love collecting and I love painting and I love battling. I have models made by King and Country that are fifty dollars a piece, 54mm tall, professionally painted and excellent to display. I have Gundam models (Gunpla) that I've built myself and fidgeted with panel lining and mild weathering. I've got scale models I've painted from a mediocre standard to my best ability. Also I have something between 110 and 140 painted Ultramarine models which is my favorite grim dark army.

I want to expand my collections always though. There are new armies to collect, new forces to display, new models that would be cool. I lack the financial or chronological means to do this but rather than see it as a depressing loss I choose to see the ample bosom of hobby potential as a candy store full of delicious yumminess. I have only a dollar, and that means I can't buy the big candy bars and have to settle for the nickel candy. This is fine, it's still delicious and still fun.

One of the strange occurrences related to this is sometimes I collect more of a kind of model than is needed like Space Marine Captains. I have three of them for my Third Company; the first captain I used was from the Assault on Black Reach starter box an excellent model with a kick ass back banner. Then he evolved into a captain from the kit that fought with a lightning claw and combi-metla, super metal! BUT NOW, now he has evolved into the Captain in Gravis Armor for the Dark Imperium starter set; a fierce looking model  with rippling cape and holding his power sword aloft valiantly! All of these models are the same captain, Artemis, and as I get new models he evolves and the old captain moves into retirement. This lets me get cool new models to replace cool already owned models but have some form of inner chronology and procession.

Of course I also started painting a Fourth Company so no judgement please.

This discourse has led me to what I have kind of started seeing as a sweet spot for my personal collecting with 40K, the fifty point limit. I like having a variety of model because I'm a hobbyist but it's a problem to go "I collect Necrons now!" because often this leads you to be mentally investing your finances more than you may really want to or frankly should. So instead I'm going to limit collecting of a faction to no more than 50 power points, or in other games a rough equivalent of points. Lets go back to the Necron example. I recently obtained the Forge Bane box set of Necrons and that has given me a good starting point of a Cryptek, a unit of Immortals, a unit of Lychguard, and a unit of Wraiths. Also I've got a unit of Warriors in the stash and together this gives me a nice 32 power of a collection. I've got room in point for another unit or two and really I've already got that kind of planned bringing the total to 49. This will give me a nice playable collection, nothing for large battles, but good for afternoon fights. This way I can have a nice collection, get to play with them, and control my spending.

So finally we get to the first entry of the title: STRIKE FORCE ARTEMIS or the current 50 power incarnation of my boys in blue. I like playing games with some efficiency and many of my local players lack the ability to take what I would call "timely turns". It is not an uncommon thing in the hobby. Some people just like to take their time on their turn and that is fine. I feel the appropriate format for this though is smaller games. I've decided to put some multiples of games into a specific strike force to concrete the rules a little in my head. It will consist of the following: 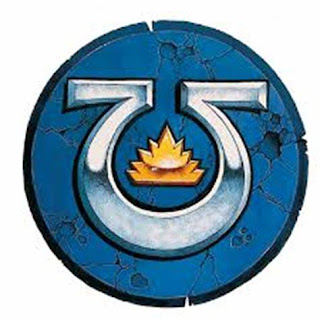 I feel this is a solid two pronged force with a secure infantry body in the captain being backed up by two squads of Intercessors and Mordrus while the strike section of a tactical squad in rhino backed by an assault squad takes objectives. The air support can go tank hunting, troop hunting, or back up either group in a single turn. As this is a battalion I'll have 8 command points to play with which for a 50 power level game is respectable I think. Obviously there are weaknesses but those are found in any strike force and you just have to do your best to reduce their impact right?

And finally, while not meeting my weekly desire I am going to hope to continue to fight for it. Photography right now is difficult for me to complete so some posts will have to do with filler images until I can get the chance to use my feeble camera.