The bomber was done nearly on time, the day after my set date so that would have been this past Monday. It has taken me this long to get a photo taken as I've been very busy and the photo isn't even that good. It is enough though to verify my completed project and i'm pleased with that. 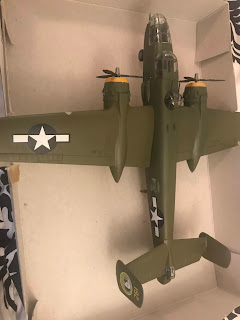 I had some small difficulties in completing it and even in posting this picture which wants to load vertical instead of horizontal regardless of what I try. In it's completion even it fell and broke several of the guns creating a damaged final product.

Next project with a due date of Sunday the 23rd is a set of Atalan Jackals from Games Workshop for my friend's Genestealer Cults army. See you in seven days or so!
Posted by adeptgamer at 6:16 PM