In planning my battle for Madison Hill I've been deep in thought about the wizards that will be battling there. I've decided there are three; a classic wizard in the defense forces, the necromancer general of the undead army, and a vampire with dark magic. Realizing I'm constructing rules for only 3 wizards means I can and am going to make the rules for those three wizards. I don't want to get into the Age of Sigmar format that has war scrolls for each unit but instead just a selection of spells that all can use that are separated into dark and light. Dark magic clearly is offensive and evil in nature and light magic will be more utilitarian and protective but have no dangers in use. 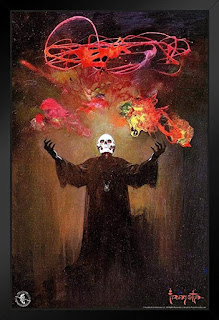 Each wizard will generate 2d6 points of magic at the beginning of each game turn. These can be spent to cast spells during the different phases of the game according to the spell's use. Wizards can retain their magic points earned between game turns to save up for more powerful spells. The spells provided have either a flat cost or one that scales, such as the ubiquitous fire ball spell that can have magic dumped into it to make the impact greater.
I said above dark and light magic would have slightly different effects. The basic idea i'm working off from is that dark magic has a chance to go wrong and hurt the caster or nearby soldiers and light magic can throw out "sparks of radiance" that can destroy undead and spirits but isn't harmful to the living. This enables the necromancer general to throw light spells with risk and the good wizard to thrown dark magic with risk.
Posted by adeptgamer at 8:23 PM